Sunshine Coast Line is also a colloquial name referring to the Nambour and Gympie North railway line in Queensland, Australia.

On Sundays, Colchester Town, Hythe and Weeley are all closed. Therefore, the Sunday service consists of an hourly shuttle service between Thorpe-le-Soken and Walton-on-the-Naze, and an hourly service between Clacton-on-Sea and London Liverpool Street.

The Great Eastern Main Line opened between Colchester and Ipswich in 1843 and the section to London was due to open in 1849.

The first short section of the Sunshine Coast Line was built by the Colchester, Stour Valley, Sudbury and Halstead Railway to the port of Hythe opened for goods on 31 March 1847. In 1859 the Tendring Hundred Railway Company was formed to extend the line from Hythe to Wivenhoe which opened on 8 May 1863 for both passenger and goods services from Colchester. By the time the Wivenhoe extension open the line was operated by the GER Great Eastern Railway.

A second company, the Wivenhoe & Brightlingsea Railway, had been incorporated in 1861 to build a line from Wivenhoe to Brightlingsea which opened on 17 April 1866. There were also proposals to build a line to Clacton as early as 1866, but nothing came of them until 1877, when the Clacton-on-Sea Railway was incorporated. The connection from Thorpe-le-Soken to Clacton opened on 4 July 1882, also operated by the GER.

The GER soon negotiated to buy both the Tendring Hundred Railway and the Clacton-on-Sea Railway, and both became part of the GER on 1 July 1883. The Wivenhoe & Brightlingsea was absorbed by the GER on 9 June 1893.[3] Electrification of the line commenced in the 1950s and by January 1959 the line was electrified as far as Great Bentley. The first trial train to run on the newly electrified section departed Colchester on 18 January 1959 and terminated at Great Bentley. The line was the first to be electrified at 25 kV AC, using overhead wires, with electrified services inaugurated on 13 April 1959.[4]

Passenger services have been operated by two different franchises since privatisation in 1997, First Great Eastern ran the services until 31 March 2004 when the National Express Group took over the franchise, with the company branded one Railway until February 2008, at which time it was rebranded to National Express East Anglia.

When First Great Eastern won the franchise in 1997, they overhauled the timetables and increased the number of trains that run non-stop between Thorpe-le-Soken and Wivenhoe which resulted in a reduced level of service at various intermediate stations on the line such as Great Bentley and Alresford. The current operator, National Express East Anglia, has maintained this policy and the current timetable[when?] sees trains running fast from Thorpe-le-Soken to Wivenhoe and vice-versa without calling at the village stations.[5] 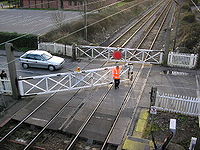 A £104 million engineering project known as 'The Colchester to Clacton Resignalling Project' took place on the line between December 2006 and July 2009 [6]. Life-expired signalling equipment was replaced and a new control system was installed; 170 modern LED signals were installed and eight manual level crossings were upgraded to full barrier crossings with CCTV (including Great Bentley, Frinton-on-Sea, Clacton-on-Sea, Thorrington and Alresford). The line was closed every weekend and bank holiday and a bus replacement service was provided.[7] There was opposition from the town to keep the manual gates which were removed 'under cover of darkness'. Folklore has it that fed-up townspeople used to lock the gates to keep out coachloads of tourists.[8]

In December 2009, Network Rail gave its approval to Great Bentley Parish Council to turn the disused railway siding adjacent to Platform 2 of the railway station into a car park.[9] Once built, it will significantly increase the current parking capacity at the station and will hopefully put an end to the ongoing congestion problems in the village. The car park will also attract commuters to use the station from nearby towns and villages including Brightlingsea, Frating, Thorrington and St Osyth. A growth in the passenger usage at Great Bentley should result in more express trains stopping here.

In April 2010, Network Rail confirmed they have completed all their checks and procedures regarding the proposed car park and are ready to begin negotiating a lease with the Parish Council.[10]

Work to upgrade Hythe Station and extend the platforms has been completed. This has improved transport links to the town centre and enable commuters to travel directly into the capital from the station. The Station improvements including replacing the existing station building with new waiting facilities, lighting, CCTV, landscaping and covered space for up to 24 bikes (with room for expansion if usage is high) has been paid for with a £600,000 Haven Gateway New Growth Point grant.

The final phase of works seeks to deliver an innovative public art work that is influenced by the history and context of the Hythe. Commissioned artists Martin Newell and Dale Devereux Barker will be working with the East Colchester community to produce hoardings as an attractive focal point within the developed station.[11]

The Class 321's mostly operate the Walton-on-the-Naze to Colchester local services as 4 cars.

The Class 360's mostly operate the Clacton-on-Sea to London Liverpool Street semi-fast services as 4 or 8 cars during the off-peak and either 8 or 12 cars during the peak hours.

However, some Walton services originating from London use 360's and some peak Clacton services use 321's.