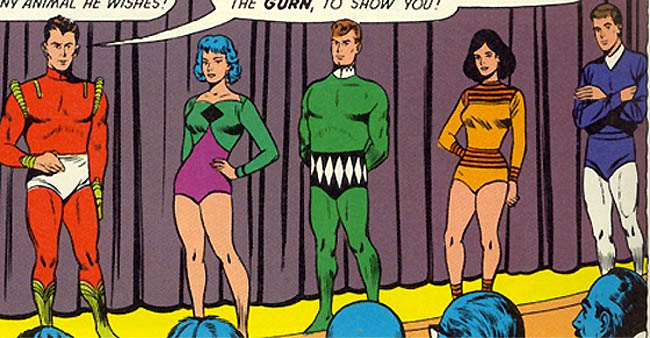 Evolvo Lad
Gas Girl
Life Lass
memberlist=
subcat=DC Comics
hero=y
villain=
sortkey=PAGENAME|The Heroes of Lallor are a group of fictional in the universe. They appear in stories featured in "" involving the .

The original Heroes of Lallor are five super-powered youths born roughly during the same time period on Lallor, a planet run by a dictatorship. They were born with superpowers after their parents were exposed to atomic radiation. They were raised by the government, but are eventually banished for opposing the dictatorship. First appearing in "Adventure Comics" #324, these heroes have "stronger" powers than the members of the Legion of Super-Heroes. They are tricked into attempting to destroy the Legion by a villain related to the Jungle King, who had died fighting the Legion earlier. During the battle, and fall in love; they continue their relationship after the truth about the Heroes is discovered. At the end of the story the dictatorship on Lallor is overthrown and the heroes choose to remain on their planet.

In "Adventure Comics" #339, one of the members, Beast Boy, who had been shunned by Lallorian society, flees to a jungle planet, Vorn. There he leads the animals on the planet in a revolt against humans. He dies saving a little girl from an attack by one of the animals. He is buried on , the memorial planet.

Duplicate Boy and Shrinking Violet break up after she is kidnapped by Imskian rebels and replaced in the Legion by a Durlan named Yera. Violet confronted Duplicate Boy for finding out the truth (he x-rayed the imposter) ["Legion" v.2 #298 (April 1983)] and failing to come to Violet's rescue. ["Legion" v.2 #313 (July 1984)]

The Heroes of Lallor made a single appearance in post-Zero Hour Legion continuity. In "Legionnaires" #49 (Jun 97), they appear in a single panel, being told they cannot go to help the Legion, as they are needed on Lallor. Members shown in this scene are Beast Boy, Gas Girl, and Splitter. Evolvo had previously been established as a member of the Workforce.

Members of Heroes of Lallor