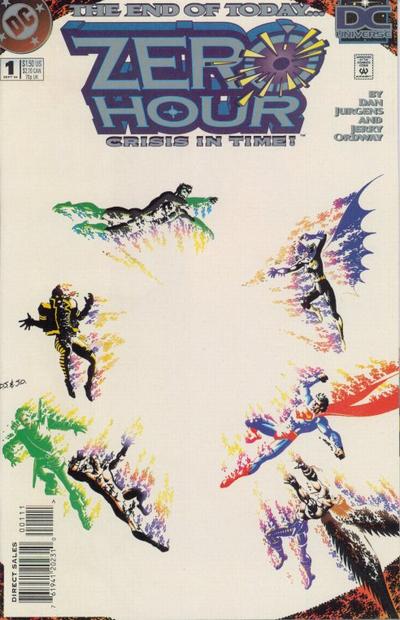 "Zero Hour: Crisis in Time" is a five-issue and crossover storyline published by in 1994. In it, the one-time hero , who had until then been a member of the intergalactic police force known as the , mad with grief after the destruction of his home town of (during the "Reign of the Supermen" storyline) and having obtained immense power as Parallax, attempted to destroy, and then remake, the . The crossover involved almost every DC Universe monthly series published at the time. The issues of the series itself were numbered in reverse order, beginning with issue #4 and ending with #0 (i.e. "Counting Down To Zero"). The series was written and penciled by , with inks by .

This series is noted for its motif of the DC Universe gradually "fading out" as events reached their climax.

"Zero Hour: Crisis in Time" was intended by DC as a belated follow-up to their landmark "", and was indeed subtitled "(A) Crisis in Time". It promised to do for the inconsistent future timelines of the DC Universe what "Crisis" had done for its parallel worlds: unify them into a new one.

This event served as an opportunity to reconcile some of the problems left unaddressed by "Crisis" and other problems that had been unintentionally caused by it. In particular, the revised characters of the post-Crisis universe had been rolled out gradually, with DC continuing to feature the old versions until the new versions were launched, some of them a year or several after the first wave of revised characters were published (i.e. "The Man of Steel", "Wonder Woman Vol. 2", ""). The character of was one of the most problematic, since the revised version didn't first appear until 1989. This raised the question of what version of Hawkman had been seen since 1986 (he had been ned to be both the Golden Age Hawkman and a ian spy). The faced similar problems with the eliminations of Superboy and Supergirl from DC continuity (Mon-El, a character with similar powers, had been recast as Valor to take Superboy's place as the Legion's inspiration and most powerful member). These and other retcons were not always well received by readers and often introduced new problems.

"" is loosely connected with "Zero Hour", as can be seen from the Sandman annotations. [ [http://www.sequart.com/sandmanGAIMAN.htm The Continuity Pages: The Sandman] ]

The story begins when characters from such as and Triumph suddenly started appearing in the main DC Universe, to everybody's confusion; this happens because time is being somehow 'compressed.' Then a wave of "nothingness" is seen moving from the end of time to its beginning, erasing entire historical ages in the process (an effect similar to the anti-matter wave that destroyed many universes in "").

The apparent villain of the story presented in the miniseries was a character named Extant, formerly Hawk of the duo (and a onetime Teen Titan). Extant had acquired temporal powers, using them to unravel the DC Universe's timeline. In a confrontation with members of the , Extant aged several of them (removing the effect that had kept these heroes of the 1940s vital into the 1990s), leaving them either feeble or dead. However, the true power behind the destruction of the universe—caused by temporal rifts of entropy—turned out to be , who had been widely regarded as the most distinguished in history. Calling himself Parallax, Jordan had gone insane, and was now trying to remake the universe, undoing the events which had caused his breakdown and his own murderous actions following it. The collective efforts of the other superheroes managed to stop Jordan/Parallax from imposing his vision of a new universe, and the timeline was recreated anew, albeit with subtle differences compared to the previous one, after the young hero Damage, with help from the other heroes, triggered a new .

This 'blanking out/recreation' of the DC Universe was reflected in many of the tie-in issues; near the end of several of the tie-ins, the world began to disappear, and the last page of the book (or in some cases, several pages) had been left blank.

DC published a fold-out timeline inside the back cover of "Zero Hour" #0 which identified various events and key stories which were part of its newly singular timeline, and when they occurred. Although fixed dates were given for the debut of historical characters such as the JSA, the debut of the post-Crisis Superman was presented as "10 years ago" and subsequent dates were expressed the same way, suggesting that the calendar years of these events were fluid and relative to the present rather than fixed, as a way to keep the characters at roughly their present ages.

The "Legion of Super-Heroes"' continuity was completely rebooted following "Zero Hour", and the various Hawkman characters were merged into one (even though, contrary to the storyline's purpose, this created new sets of contradictions and confusions). Each ongoing series at the time was given an opportunity to retell (or clarify) the origin of its hero(es) to establish the official version in this revised continuity, in a "#0" issue published in the subsequent weeks after "Zero Hour". They resumed their previous numbering or went on to #1, for new series, the following month. Several series took new directions following "Zero Hour"; for example, new teams were formed in the books, Oliver Queen's son was introduced in "", and Guy "Warrior" Gardner discovered an alien heritage which gave him different powers.

A major part of 's origin was retconned after the events in "Zero Hour". In this version, Batman never caught or confronted the killer of his parents (thus rendering ' non-canonical), and more importantly, Batman was thought of as being an . Also, was not a prostitute but rather lived in the low rentals area of Gotham. Finally, contributing to a plot point not fully explored in ', was legally adopted by Wayne.

But this "warm reboot" did not solve all continuity matters - "Who is Hawkman?" actually became "less" clear - and some fans and creators felt that multiple worlds and timelines were an asset (rather than a hindrance) to the DC Universe. For those and other reasons, DC later introduced a variation of the pre-Crisis concept of the Multiverse, in the form of . In the end, this more ecumenical solution did not satisfy DC editors either, inevitably leading to the "" event in 2005, which revived and brought back several pre-"Crisis" concepts.

"Zero Hour" also served to launch or end several ongoing series. A few of these were dictated by the changes in continuity that came out of the story, but most happened simply because it provided a convenient marketing opportunity to start new series. However, each of the new series (save for "Starman") were canceled after a couple of years, due to poor sales. The critical success of "Starman" was a turning point for DC's editors and how they viewed DC's Golden Age characters and their ongoing story potential, starting a trend reflected in a small family of books set in the present but reflective of the past, such as "Starman"'s successor title, the current "" series.

*"" and "Legionnaires" (Post-"Zero Hour", both titles were treated as one fortnightly series, much like the "Superman" books at the time)

Zero Month immediately followed with every DC Universe title published being numbered issue "#0". Those "issue 0" comics feature the slogan, "The Beginning of Tomorrow!"

In 2008, fourteen years later, an issue of "Booster Gold" (vol. 2) was published as "Booster Gold" #0", and was announced as an official "Zero Hour" by DC Comics. The issue used the same cover style as previous tie-ins to the event, referring to the "Crisis In Time" and using the semi-metallic "fifth color" ink used on the original "Zero Hour" issues. Like the other tie-in issues, Booster's origin was explained as part of the adventure in the issue. The cover was an homage to "Zero Hour" #4, with 's mask replacing Wally West's, alternate Blue Beetles replacing the alternate Hawkmen, and the heroes around the edges replaced by Booster in the center. [Cite comic
Story =
Title = "Booster Gold" (vol. 2) #0
Date = February 2008
Publisher = ]