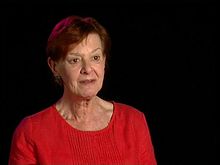 Verity Ann Lambert, OBE ( &ndash; ) was an English television and . She is best known as the founding producer of the science-fiction series "", a programme which has become a part of British .

Lambert was a pioneer woman in ; when she was appointed to "Doctor Who" in 1963 she was the youngest producer, and only female drama producer, working at the .

Lambert began working in television in the 1950s, and continued to work as a producer up until the year she died. After leaving the BBC in 1969, she worked for other television companies, notably and in the 1970s and 80s. She also worked in the film industry, for Thorn EMI Screen Entertainment, and from 1985 ran her own production company, . In addition to "Doctor Who", she produced"", "","", "Minder","Widows", "G.B.H.", "" and "".

The 's "" website describes Lambert as "one of those producers who can often create a fascinating small screen universe from a slim script and half-a-dozen congenial players."

Lambert was born in , the daughter of a accountant, and educated at .

Following her dismissal from Granada, Lambert took a job as a typist at ABC Television. She soon became the secretary to the company's Head of Drama, and then a production secretary working on a programme called "State Your Case". She then moved from administration to production, working on drama programming on ABC's popular anthology series "". "Armchair Theatre" was overseen at the time by the company's new Head of Drama, Canadian producer .

On , while Lambert was working as a production assistant on "Armchair Theatre", actor Gareth Jones died off-screen just prior to a scene in which he was to appear during a broadcast of the hour-long play "Underground". Lambert had to take control of directing the cameras from the studio gallery as director William Kotcheff hastily worked with the actors during a commercial break to accommodate the loss.

In 1961 Lambert left ABC, spending a year working as the personal assistant to American television producer at the independent production company in New York. Returning to England, she rejoined ABC with an ambition to direct, but got stuck as a production assistant, and decided that if she could not find advancement within a year she would abandon television as a career.

In December 1962 Sydney Newman left ABC to take up the position of Head of Drama at , and the following year Lambert joined him at the Corporation. Newman had recruited her to produce "", a programme he had personally initiated. Conceived by Newman as an educational science-fiction series for children, the programme concerned the adventures of a crotchety old man travelling through space and time with his sometimes unwilling companions in a machine larger on the inside than the out. The show was a risk, and in some quarters not expected to last longer than thirteen weeks.

Although Lambert was not Newman's first choice to produce the series &mdash; Don Taylor

When Lambert arrived at the BBC in June 1963, she was initially given a more experienced associate producer, , to assist her. "Doctor Who" debuted on and quickly became a success for the BBC, chiefly on the popularity of the alien creatures known as s. Lambert's superior, Head of Serials Donald Wilson, had strongly advised against using the script in which the Daleks first appeared, but after the serial's successful airing, he said that Lambert clearly knew the series far better than he did, and he would no longer interfere in her decisions. The success of "Doctor Who" and the Daleks also garnered press attention for Lambert herself; in 1964, the "" published a feature on the series focusing on the perceived attractiveness of its young producer: "The operation of the Daleks ... is conducted by a remarkably attractive young woman called Verity Lambert who, at 28, is not only the youngest but the only female drama producer at B.B.C. TV... [T] all, dark and shapely, she became positively forbidding when I suggested that the Daleks might one day take over "Dr. Who"."

Lambert oversaw the first two seasons of the programme, eventually leaving in 1965. "There comes a time when a series need new input," she told "Doctor Who Magazine" thirty years later. "It's not that I wasn't fond of "Doctor Who", I simply felt that the time had come. It had been eighteen very concentrated months, something like seventy shows. I know people do soaps forever now, but I felt "Doctor Who" needed someone to come in with a different view."

In the 2007 "Doctor Who" episode "Human Nature", the Doctor (as John Smith) refers to his parents as Sydney and Verity, a tribute to both Newman and Lambert.

She moved on to produce another BBC show created by Newman, the swashbuckling action-adventure series "" (1966&ndash;67). The long development period of "Adam Adamant" delayed its production, and during this delay Newman gave her the initial episodes of a new , "The Newcomers", to produce.

At Thames and Euston, Lambert enjoyed the most sustained period of critical and popular success of her career. "The Naked Civil Servant" won a (BAFTA) for its star as well as a Award and a prize at the ;

Television historian Lez Cooke described Lambert's time in control of the drama department at Thames as "an adventurous period for the company, demonstrating that it was not only the BBC that was capable of producing progressive television drama during the 1970s. Lambert wanted Thames to produce drama series 'which were attempting in one way or another to tackle modern problems and life,' an ambition which echoed the philosophy of her mentor Sydney Newman." , the writer of "Rock Follies", also later praised the bravery of Lambert's commissioning. "Verity Lambert had just arrived as head of drama at Thames TV and she went for broke," he told "" newspaper in 2002. "She commissioned a serial, "Jennie: Lady Randolph Churchill", for safety, but also "Bill Brand", one of the edgiest political dramas ever, and us... Before we had even finished making the first series, Verity commissioned the second."

Lambert's association with Thames and Euston Films continued into the 1980s. In 1982, she rejoined the staff of parent company Thames Television as Director of Drama, and was given a seat on the company's board. In November 1982 she left Thames, but remained as Chief Executive at Euston until November of the following year, to take up her first post in the industry, as Director of Production for Thorn EMI Screen Entertainment. Her job here was somewhat frustrating as the British film industry was in one of its periodic states of flux, but she did manage to produce some noteworthy features, including the 1986 film "Clockwise."

Lambert later expressed some regret on her time in the film industry in a feature for "" newspaper. "Unfortunately, the person who hired me left, and the person who came in didn't want to produce films and didn't want me. While I managed to make some films I was proud of — 's "", and "Clockwise" with John Cleese — it was terribly tough and not a very happy experience."

In late 1985 Lambert left Thorn EMI, frustrated at the lack of success and at restructuring measures being undertaken by the company. She established her own independent production company, . The company's first production was the 1988 feature film "", starring and and based on the "dingo baby" case in . Cinema Verity's first television series, the BBC1 "", debuted in 1989 and ran until 1994. The company also produced another successful BBC1 sitcom, "", which ran from 1992 to 1994.

A less successful Cinema Verity production, and the most noted mis-step of Lambert's career, was the soap opera "Eldorado", a co-production with the BBC set in a British community in . At the time it was the most expensive commission the BBC had given out to an independent production company.

In the early 1990s, Lambert attempted to win the rights to produce "Doctor Who" independently for the BBC; however, this effort was unsuccessful because the Corporation was already in negotiations with producer in the . Cinema Verity projects that did reach production included "Sleepers" (BBC1, 1991) and "" (BBC One, 2001), the latter co-produced by actress , whose idea it was to adapt the novels by .

Lambert continued to work as a freelance producer outside of her own company. She produced the popular BBC One comedy-drama series"", by writer , ever since taking over the role for its second series in 1998. From then until 2004 she produced eighteen episodes of the programme across four short seasons, plus two Christmas Specials. She and Renwick also collaborated on another comedy-drama, "", starring and transmitted on BBC One in the autumn of 2005.

In 1973, Lambert married television director Colin Bucksey (a man ten years her junior), but the marriage collapsed in 1984, and they divorced in 1987.

In the 2002 New Year's Honours list Lambert was appointed an Officer of the Order of the British Empire (OBE) for her services to film and television production, [cite web|url=http://news.bbc.co.uk/1/hi/entertainment/tv_and_radio/1734557.stm|title=Honours: Film and broadcasting|publisher=|date=|accessdate=2006-09-13] and the same year she received BAFTA's Award for Outstanding Contribution to Television. [cite web|url=http://www.guardian.co.uk/uk_news/story/0,,688397,00.html|title=And the winners are...|publisher=|date=|accessdate=2006-09-13] She died of cancer five days before her 72nd birthday.

Her last work was to produce the second series of "Love Soup". A dedication, to her memory, was shown after the first episode was aired on .