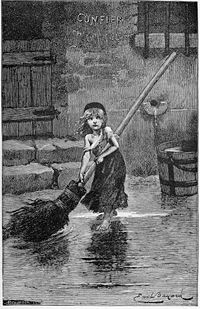 Euphrasie "Cosette" Fauchelevant (also referred to as "Ursule," the "Lark" and "Mademoiselle Lanoire"; born c. 1815) is a fictional character in the novel Les Misérables by Victor Hugo.

Cosette in the novel

In the novel, the young Cosette's mother Fantine places her under the guardianship of the Thénardiers, where she is severely mistreated. They beat her, starve her, and force her to perform heavy labor in their inn. Under the Thénardiers' care, she is described as "thin and pale," wears rags for clothing, and she has chilblains on her hands as well as bruised and reddened skin. The author also states that "fear was spread all over her."

Euphrasie, nicknamed Cosette by her mother Fantine, is the illegitimate daughter of Fantine and Félix Tholomyès. After Tholomyès abandons Fantine, she leaves Cosette with the Thénardiers at their inn in Montfermeil, paying them to care for her child while she goes to work in the city of Montreuil-sur-Mer. Unbeknownst to Fantine, the Thénardiers abuse and mistreat Cosette while she is under their care for the next five years.

While Fantine is in the hospital, the mayor of Montreuil-sur-Mer--who is Jean Valjean masquerading under the name "Madeleine" to avoid being arrested as an escaped convict--vows to retrieve Cosette for her. Although Fantine dies before her daughter can be brought to her, Valjean becomes determined to look after the young girl.

When he arrives in Montfermeil on Christmas Eve, he finds Cosette fetching a pail of water for the Thénardiers. He accompanies her back to the inn and witnesses the Thénardiers’ mistreatment of her, as well as the unkindness that their daughters Éponine and Azelma show her. After seeing this, Valjean leaves the inn and soon returns with an expensive new doll, which he offers to Cosette. At first Cosette is reluctant to take the doll, but then she joyfully accepts it. This makes Mme. Thénardier furious at Valjean, and Éponine and Azelma become jealous.

The next morning on Christmas Day, Valjean informs the Thénardiers that the real reason he is at the inn is because he wants to take Cosette with him. Mme. Thénardier immediately agrees to this, but M. Thénardier pretends to have adoration for Cosette and acts reluctant to give her up. Valjean pays them 1,500 francs, settling all of Fantine's debts, and he and Cosette leave the inn. However, M. Thénardier tries to swindle more money out of Valjean by running after them and telling Valjean that he has changed his mind and now wants Cosette back. He informs Valjean that Cosette's mother had entrusted her to their care and that he cannot release Cosette without a note from her mother. Valjean, agreeing with him, hands him a letter signed by Fantine. M. Thénardier then attempts to order Valjean to either return Cosette or pay a thousand crowns, but Valjean ignores him and leaves with Cosette.

Valjean takes Cosette directly to Paris. They lodge at Gorbeau House, and Valjean begins giving her a basic education. When Inspector Javert discovers Valjean's whereabouts, Valjean and Cosette are forced to flee. After climbing over a wall, they soon find themselves in the Petit-Picpus convent. The gardener Fauchelevant, who was once rescued by Valjean in Montreuil-sur-Mer, recognizes "Monsieur Madeleine" and is eager to help him. Valjean poses as Fauchelevant's brother, assuming that name for Cosette and himself, and the two live peacefully in the convent for many years. Valjean works with Fauchelevent while Cosette is educated. As Cosette grows up, she appears to have no recollection of her childhood before arriving at the convent. She leaves the convent at the age of 14.

In a later chapter, Cosette does eventually remember her childhood. She remembers praying for the mother she never knew, the Thénardiers as two ugly creatures, and fetching the water for the Thénardiers somewhere "very far from Paris." In the same chapter, she asks Valjean about her mother, but he does not answer her question. When Cosette has a dream about her mother as an angel, she remarks that her mother must have been a saint. Valjean answers by simply saying, "through martyrdom."

Their first meeting is in the Luxembourg Gardens. Both Marius and Cosette fall in love with each other when their eyes meet (although this only happens after constantly seeing each other over the course of several months), and they begin to constantly think of each other. When Valjean takes notice of Marius’ affections, he sees Marius as a coward for not confronting him and seeking approval to court his "daughter." He also fears losing Cosette, who has become the source of his happiness, to Marius. After Marius discovers their address, Valjean then takes Cosette away from the Luxembourg Gardens and moves to another house, which he frequently does nevertheless as a means of dodging Javert and the law in general.

Marius spots Cosette again during a charitable visit she and Valjean make to the Thénardiers at Gorbeau House, directly next door to Marius. He asks Éponine to find her address for him, and she reluctantly agrees to. After many weeks, Éponine takes Marius to Cosette’s new address in order to see Marius happy. Marius idly watches Cosette for a few nights before approaching her. When Cosette and Marius finally meet again in the garden, both of them confess that they love each other, share their first kiss together and introduce themselves. They continue to meet each other from that point on. On one night, while Éponine prevents M. Thénardier, Patron-Minette and Brujon from robbing Valjean and Cosette’s house, Cosette informs Marius that she and Valjean will be departing for England soon. This news devastates them both, because it will mean the end of their relationship. Marius briefly attempts to obtain money and permission to marry from his grandfather to circumvent this issue, but ultimately their discussion dissolves into a heated argument stemming from the grandfather's suggestion to "Make her (Cosette) your (Marius') mistress", which ends with Marius storming out.

The next day, Éponine (now dressed as a boy) finds Valjean in an embankment in the Champ de Mars and anonymously throws him a note, which tells him to "move." Valjean considers this in horror for a few days, then informs Cosette they will move to their other house and will be in England in a week. Cosette quickly writes a letter to Marius with this information. She catches sight of Éponine through the gate and asks the "workman" to deliver the letter to Marius. Éponine accepts the letter, but does not deliver it.

Several nights later, Marius is led to the barricades by Éponine, in hope that they will die together. After being fatally shot, Éponine reveals this to Marius and gives him Cosette’s letter before she dies. Marius writes a farewell letter to Cosette, which is delivered to Valjean by Gavroche. Valjean reads Marius’ farewell letter and decides to follow Marius to the barricades. After the battle is over, he takes Marius' unconscious body through the sewers. After, quite literally, dragging Marius through quicksand in the sewer, Valjean finally manages to get Marius through the sewers alive, is let out by Thenardier, who has a government key and does not recognize him simply assuming him to be an assassin who killed Marius. He is confronted by Javert at the exit, who had pursued Thenardier there and was watching the exit in hopes of catching him. Javert helps Valjean return Marius to his grandfather's house and requests to be brought home to say goodbye to Cosette before being sent back to the galleys, Javert allows it, and when Valjean instinctively looks out the window, Javert is gone. We later find out that Valjean sparing his life at the barricade had caused a moral paradox and that Javert had gone to throw himself into the Seine. After Marius' 6 month recovery from his wounds, he is reunited with Cosette and they marry.

The Wedding and Afterwards

In February, Marius and Cosette get married. The next morning, Valjean tells Marius of his criminal history. This leads Marius to believe Valjean is dangerous, and asks him to leave him and Cosette. Valjean wishes not to be permanently separated from Cosette, so Marius grants him a visit every evening. When finding out through M. Thénardier that Valjean had saved him, Marius and Cosette go to Valjean, now on his deathbed. Valjean then shares the last minutes of his life with Marius and Cosette, while Cosette learns from Valjean about her past and her mother Fantine.

Cosette in the musical

In the stage musical based on the novel of the same name, Cosette is one of the central characters. She is played by two people, a young girl for Young Cosette in Montfermeil, 1823 and a young woman for the adolescent Cosette in Paris, 1832. Her part as an adolescent is condensed. Actors playing Young Cosette and Young Éponine interchange roles in different performances to equalize performance opportunities and vocal strain.

Differences in the musical

Cosette is featured in the following songs in the musical: