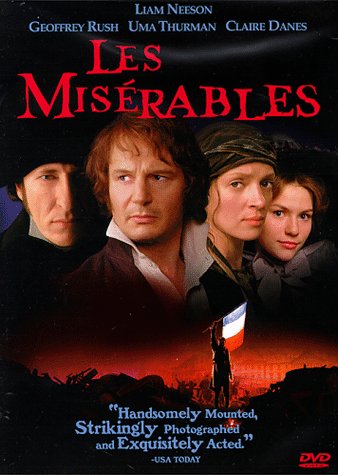 As in the original novel, the story line follows the adult life of Jean Valjean (), an ex-convict (paroled following 19 years of hard labor, for stealing bread) pursued by police Inspector Javert (). The movie is relatively true to Hugo's original novel, but shortens and simplifies the story considerably, and leaves out several important characters and scenes from the book, such as anything to do with being relegated to a ship at sea as a convict sailor. The film received a 77% rating on . and was filmed at in . [cite web | title=Les Miserables Movie Reviews | url=http://www.rottentomatoes.com/m/1083326-les_miserables | work= Rotten Tomatoes| date=2008 | accessdate=2008-06-11]

The movie follows Jean Valjean (), a man arrested for stealing bread. When released on parole, Valjean stays with a bishop as no one else was willing to allow a convict to stay the night. Through the kindness of the bishop, who Valjean attempted to rob, Valjean starts his life anew. He becomes a wealthy industrialist and a mayor. He eventually befriends Fantine, a single mother turned prostitute () whom he rescued when she was nearly arrested by the police officer Javert (). Javert was also a guard previously at the prison Valjean was held in and starts to become suspicious that the Mayor and Valjean are the same person. When Valjean receives word that another man is mistake as him and about to be rearrested, he reveals his identity. When he visits Fantine, he finds that she is deathly ill and he promises to raise her very young daughter, Cosette. When Fantine dies, Valjean escapes from Javert and buys Cosette from the Thenardiers, corrupt innkeepers who were supposed to care for her (but were actually abusing her). Many years later, the late teenaged Cosette () falls in love with a revolutionary, Marius (). By this time, the trail of Valjean is cold, and Javert is an undercover insurrectionist trying to undermine the organization to which Marius belongs. Javert, however, is captured by Marius and is brought to the barricades as a prisoner to be executed. Valjean journeys to the barricades himself when he learns how much Cosette and Marius love each other, intending to convince Marius to return to Cosette. When the soldiers shoot and kill Gavroche, a young boy allied with the revolutionists, Valjean uses his influence with Marius to have Javert turned over to him, to execute him. Instead of killing him however, Valjean frees Javert. The movie ends with Javert, unable to deal with the goodness shown him by Valjean, frees him, then commits suicide.

The movie greatly reduces the roles of many of the characters in the books, especially the , who are only seen when Valjean buys Cosette from them. Éponine doesn't appear to a great extent either, only in the scene where she and Azelma are playing at the table, in the Thénardier Inn, whilst their servant Cosette makes stockings for them, as their mother calls her names.