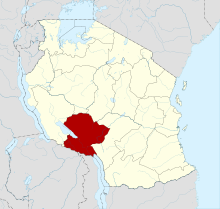 Location of Mbeya Region in Tanzania

Mbeya is one of Tanzania's 26 administrative regions. The regional capital is Mbeya. It is bordered to the northwest by Tabora Region, to the northeast by Singida Region, to the East by Iringa Region, to the South by Zambia and Malawi and to the West by Rukwa Region. Mbeya Region is occupied by several different ethnic groups including the Nyakyusa, Ndali, Nyiha, Nyamwanga, Safwa, Malila, Vwanji (or Wanji), Bungu, Sangu, Wanda and Sichela.

The Regional Commissioner for the Mbeya Region is John Livingstone Mwakipesile.[2]