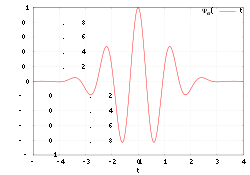 In mathematics, the Morlet wavelet, named after Jean Morlet, was originally formulated by Goupillaud, Grossmann and Morlet in 1984 as a constant κσ subtracted from a plane wave and then localised by a Gaussian window:

is defined by the admissibility criterion and the normalisation constant cσ is:

The Fourier transform of the Morlet wavelet is:

which, in this case, is given by the solution of the equation:

For signals containing only slowly varying frequency and amplitude modulations (audio, for example) it is not necessary to use small values of σ. In this case, κσ becomes very small (e.g.

) and is, therefore, often neglected. Under the restriction σ > 5, the frequency of the Morlet wavelet is conventionally taken to be