Salem-Keizer Transit, branded and popularly known as Cherriots (due to Salem's "Cherry City" sobriquet) and more formally the Salem Area Mass Transit District, is a public agency that operates mass transit in the metropolitan area of Salem and Keizer, Oregon, United States. Cherriots provides the region's bus system and CherryLift paratransit service required by the Americans with Disabilities Act of 1990. It has operated mass transit in the Salem area since 1979.

Cherriots currently operates Monday through Friday. There are 22 bus routes within Salem and Keizer and 2 express bus routes to Grand Ronde and Wilsonville. The Wilsonville express route is partially operated by SMART and connects with TriMet of Portland. Cherriots works closely with Chemeketa Area Regional Transportation Services (CARTS) which provides bus service that connects Salem to destinations as far north as Woodburn, as far west as Dallas, and to the east to Silverton and up the Santiam Canyon to Mill City.

Most Cherriots bus routes radiate from the Transit Mall around Courthouse Square in downtown Salem between High and Church Streets, or the Glen Creek Transit Center in West Salem between Glen Creek and Taybin Roads. A new transit center at Keizer Station is planned for completion in 2012 using state and federal grants.

In 2009, Cherriots routes underwent major changes due to funding limitations. Service hours were reduced and Saturday service was eliminated. At the same time, Cherriots redesigned many of its routes to provide better service within funding levels.

Cherriots maintains a fleet of 64 buses, which carries over 10,000 weekday trips. Cherriots uses mainly Gillig clean diesel buses along with several Orion VII buses powered by compressed natural gas. All buses are ADA accessible and have bike racks on the front that can accommodate up to two bicycles at a time. 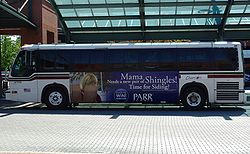