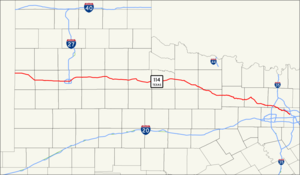 State Highway 114 or SH 114 is a that runs from the westward across the state to the state border with , where it becomes , which eventually ends at at US 70/.

The route was originally planned by 1933 as connector between Dallas and Bridgeport. By 1939, this section was completed, with an extension northward from Chico to Sunset. This route remained little changed until 1973, when it was extended northward from Sunset to Bowie. Major rerouting was made in 1976, when the route was redirected west over U.S. Highway 380, U.S. Highway 281, former SH 199, and U.S. Highway 82 from Bridgeport to Lubbock, with the stretch from Bridgeport to Bowie transferred to SH 101. In 1977, the route was extended to the New Mexico border, connecting to it sister , replacing State Highway 116.

The highway's eastern terminus is at the intersection with SH 183 at in Irving. It continues northwest as the "John W. Carpenter Freeway" (a name shared with SH 183) along the , eventually crossing the airport's northern entrance, proceeding west into Grapevine. At Grapevine, it continues northwest through Southlake and Westlake, eventually intersecting Interstate 35W at . Except for the western end, most of this route is freeway; the SH 114 Business road in the Roanoke area (the original routing of the highway) is named for the late golfer , who lived in that area.

In Lubbock, Highway 114 follows Idalou Road where it separates from US 82, then bears west along 19th Street, eventually forming the southern boundary of , where it then separates from US 62. It passes Loop 289 and exits Lubbock continuing towards the west along 19th Street and then Levelland Highway. As it continues west, it passes through Smyer, Levelland, Whiteface and Morton before crossing into New Mexico.