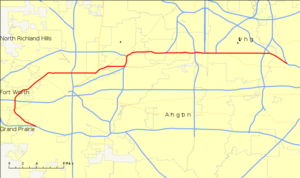 State Highway 183 or SH 183 is a in the Dallas-Fort Worth in . Its most heavily used section is designated Airport where it serves the southern entrance of .

Its eastern terminus is the interchange with Interstate 35E in Dallas. It leads northwest as the John W. Carpenter Freeway, then moves westward at the three-way interchange with State Highway 114 and Loop 12 at (from which Highway 114 continues as the Carpenter Freeway). The freeway continues as Airport Freeway on its westerly course through Irving, and forms the southern boundary of DFW Airport.

Moving into Tarrant County, the freeway, still called Airport Freeway, continues west through Euless, Bedford, and Hurst. In Bedford, 183 joins State Highway 121 and both follow the same co-signed westerly route. At the intersection with Interstate 820, 183 and 121 turn south with the interstate, and all three highways briefly share the same co-signed route.

Highway 183 leaves I-820 after less than two miles at a with State Highway 10 (a route that formed the original pre-freeway alignment of SH 183). 183 then turns west as it becomes a surface street, Baker Boulevard, through Richland Hills. After entering Haltom City, 183 joins State Highway 26 and, briefly, U.S. Highway 377, leading southwest through Haltom City as East Belknap Street. At an intersection with Northeast 28th Street and Midway Road, 183 turns west onto the former. After entering the Fort Worth city limits, 183 intersects Interstate 35W in a parclo interchange, then passes the historic Fort Worth Stock Yards.

In western Fort Worth and its environs, Highway 183 forms a partial ring road. In northwest Fort Worth, this semicircular route begins when 183 curves southwest as Ephriham Avenue. Continuing southwest, 183 becomes River Oaks Boulevard in River Oaks, Westworth Boulevard in Westworth Village, and Alta Mere Drive as it passes the eastern boundaries of Fort Worth Naval Air Base and White Settlement. Turning south past and a with Interstate 30, 183 crosses Spur 580 (formerly U.S. Highway 80, part of the ) and again meets U.S. Highway 377 at a . From the circle, it turns southeast as Southwest Boulevard, again becoming a freeway and passing through Benbrook before reaching its southern terminus at Interstate 20 and Southwest Loop 820 near . This freeway segment served as the alignment of Interstates 20 and 820 before the current route was completed in the early .