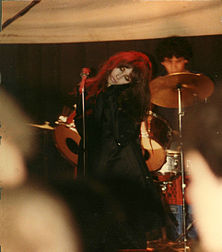 Niagara and Destroy All Monsters, Spring 1982

Destroy All Monsters were an influential Detroit band existing from 1973 to 1985, with sporadic performances since. Their music touched on elements of punk rock, psychedelic, heavy metal music and noise rock with a heavy dose of performance art. Their name likely came from the Godzilla film Destroy All Monsters, but it may also have come from a comic book with the same title. They described their music as "anti-rock."

Destroy All Monsters never found mainstream success, but earned some notoriety due to members of notable rock groups The Stooges and MC5 who joined the group.

Formed in 1973, the first edition of Destroy All Monsters was formed by University of Michigan art students Mike Kelley, Jim Shaw, Niagara (Lynn Rovner) and filmmaker Cary Loren. They performed in the Ann Arbor area from 1973–1976, and their only release was a one-hour cassette of their recordings available only through Lightworks magazine. Their early music was influenced by Sun Ra, Velvet Underground, ESP-Disk, monster movies, beat culture and futurism. Their sound was experimental, psychedelic, darkly humorous and droning.

On New Year's Eve of 1973, the first Destroy All Monsters concert was held at a comic book convention in Ann Arbor, Michigan. At the time the instruments were a violin, a sax, a vacuum cleaner and a coffee can. They performed a demented version of Black Sabbath's "Iron Man" and were asked to leave after ten minutes. The group performed "guerilla style", setting up free at parties and playing for food along Ann Arbor's frat row. They used modified instruments, a drum box, tape loops, hot-wired toys, cheap keyboards and broken electronic devices. Aside from the comic convention, the group's only formal gig in this era was at the Halloween Ball at the University of Michigan art school in 1976.

Kelley and Shaw left the band during the summer of 1976 to attend graduate school at CalArts in Los Angeles, California. Both have gone on to lead successful solo careers in the art world. Their work is held in major collections around the world. 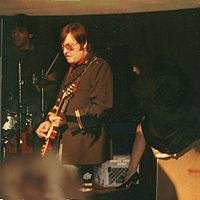 In 1977, Niagara and Loren recruited guitarist Laurence B. (Larry) Miller and saxophonist Benjamin (Ben) Miller; both had been in the short-lived Sproton Layer with their brother Roger Miller (who later went on to found Mission of Burma). They invited Mike (Jett) Powers on bass but he soon left for Harvard University. Not long after, members of two important Detroit-based groups signed on: guitarist Ron Asheton, earlier of The Stooges, and bass guitarist Michael Davis of the MC5. Their presence garnered the group more attention than ever before. Shortly thereafter, Ron asked drummer Rob King to join the band.

In 1978, Destroy All Monsters were preparing to release "Bored", their first official recording, when the group began to fall apart. Niagara ended her romance with Loren in favor of a new relationship with Asheton; Loren quit the group, with the Miller brothers leaving after the band's Halloween gig at EMU, in 1978. The "Bored"/"You’re Gonna Die" single earned some attention in the UK music press,[1] and the band was able to capitalize on the notoriety.

In late 1978, Loren issued a live DAM EP known as "Days of Diamonds" on his Black Hole label. Another EP followed in 1979, "Blackout in the City" under the name XANADU with the Miller Brothers, Loren and Rob King. Niagara and Ron Asheton carried on with various personnel releasing a total of three 7" singles on the IDBI label. Between 1982 and 1984, Destroy All Monsters played in bars and nightclubs in Ann Arbor and Detroit. Personnel: Bill Frank on drums, Mike Davis on bass, Ron Asheton on guitar, and Niagara on vocals. In May 1983, the band recorded and videotaped the song called "Make Mine Japanese." Released in December 1983, this video can now be seen on-line. The Monsters broke up in 1985. The Asheton singles were released by Cherry Red Records on CD.

The original lineup (Kelley, Loren, Niagara and Shaw) reformed for reunion shows in 1995. Loren republished the six issues of the Destroy All Monsters Magazine (1976–1979) with added DAM student artwork, flexi disc and history in the book DESTROY ALL MONSTERS:GEISHA THIS -- four VHS tapes of DAM films were also issued. An exhibition of their artwork followed at the Book Beat Gallery as well as live performances in Detroit, Los Angeles and San Diego. A live CD, "Silver Wedding Anniversary", resulted from these concerts and was released in 1996 on the Sympathy for the Record Industry label.

In 1996, the group (sans Niagara) performed in Tokyo and Osaka, Japan. A display of DAM artwork was held at the Deep Gallery in Tokyo. At the invitation of Ben Schot and Ronald Cornelissen for the "I Rip You, You Rip Me" festival and seminar at the Boijman's Museum in Rotterdam, DAM began work on the installation and film known as Strange Früt: Rock Apochrypha, an investigation of Detroit culture. This exhibition was shown and completed in 2000 at COCA (Center on Contemporary Art) in Seattle, WA., and in 2001 at the DAM Collective: Artists Take On Detroit at the Detroit Institute of Arts. This work was also selected for inclusion in the 2002 Whitney Biennial of Art in NYC.

In 2006, the "Strange Früt" exhibition and the bands archives traveled to the Magasin Center for Contemporary Art in Grenoble, France. DAM performed at the "All Tomorrow's Parties" festivals in Los Angeles as guest artists of Sonic Youth, and in London, UK as guest artists selected by Dino and Jake Chapman. A selection of the band's archives was on exhibition as part of the "Theater Without Theater" show at MACBA in Barcelona, Spain opening May 25, 2007. The exhibit traveled to Lisbon, Spain in the fall of that year.

A reprint of the first six issues of DAM Magazine with added band artwork, history, poster and a flexi disc was published by Book Beat in 1995 as Destroy All Monsters: Geisha This, and reprinted in three different editions. A DVD of selected DAM films was released in 2007 by MVD video as: "Grow Live Monsters" featuring early 8mm & 16mm films taken in 1971-1976.

In 2009 the Printed Matter bookstore in NYC mounted the Destroy All Monsters exhibit Hungry for Death curated by James Hoff and Cary Loren featuring the group's collected work.[2] The exhibition toured to White Flag Projects in St Louis, 0047 in Oslo, SPACE Gallery in London, The American Academy in Rome, Italy, Galerie 1m3 in Lausanne, Switzerland, AMP Gallery in Athens, Greece (2010) and galerie du jour agnès b in Paris, France (2011). To coincide with the Hungry for Death exhibition Printed Matter released a 1975 recording Double Sextet as a vinyl album. The band also re-released the Destroy All Monsters: 1974 - 1976 compilation, without booklet, in a limited edition of 1000.