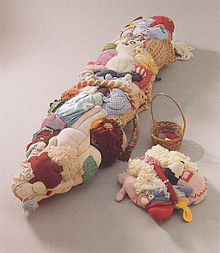 Kelley was born in Wayne, Michigan, a suburb of Detroit in 1954. In his early years he was involved with the city's music scene which spawned bands such as Iggy and the Stooges, Kelley was a member of the noise band Destroy All Monsters. In 1976 Kelley graduated from the University of Michigan. He moved to Los Angeles in 1978 and attended the California Institute of the Arts, where he admired the work of his teachers John Baldessari, Laurie Anderson, David Askevold and Douglas Huebler. At that time he started to work on a series of projects in which he explored works with loose poetic themes, such as The Sublime, Monkey Island and Plato's Cave, Rothko's Chapel, Lincoln's Profile, using a variety of different media such as drawing, painting, sculpture, performance and writing. Kelley started to gain recognition outside Los Angeles in the mid-eighties with the sculptural objects and installations from the series Half-a-Man and has since exhibited in galleries and museums worldwide[citation needed] and participated in events such as Documenta 9. Sonic Youth featured his work on the cover and booklet of their 1992 record Dirty.[1] The Whitney Museum in New York City held a major retrospective of his work in 1993.

Kelley was also in the band Poetics with fellow California Institute of the Arts students John Miller and Tony Oursler.[citation needed]

A selection of representative works