Denmark, Western Australia
This article is about the town of Denmark. For the local government area, see Shire of Denmark.

Denmark is a town in the Great Southern region of Western Australia, 423 kilometres (263 mi) south-south-east of the state capital of Perth. At the 2006 census, Denmark had a population of 2,732.[1] 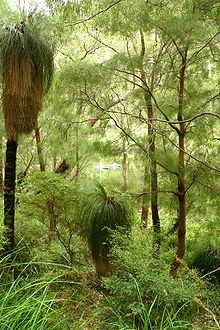 Frankland River, seen from Monastery Landing, between Walpole and Denmark.

The coast line of the Denmark area was observed for the first time in 1627 by the Dutchman François Thijssen, captain of the ship 't Gulden Seepaert (The Golden Seahorse). Captain Thijssen had discovered the south coast of Australia and charted about 1,800 kilometres (1,100 mi) of it between Cape Leeuwin and the Nuyts Archipelago. Thijssen named the discovered land after Pieter Nuyts, a high employee of the Dutch East India Company, who was aboard ship as a passenger. His name lives on in Nuytsia floribunda, the Western Australian Christmas Tree.

Two centuries later, when the first white people entered the land around the present Denmark River, the area was inhabited by the Noongar. These aborigines called the river and the inlet Kwoorabup, which means 'place of the black wallaby' (kwoor). The Noongar disappeared out of the Denmark region in the beginning of the 20th century.[3]

Although the "South Land" was discovered by the Dutch and a major western part of the continent was called Nieuw Holland (New Holland), the Dutch were more interested in the Indonesian Archipelago than colonising their newly-discovered continent. The name New Holland was officially in use until 1824 and can be found on Dutch maps towards the end of the 19th century. When the French showed an interest in the western part of Australia, Britain decided around 1825 to colonise the whole continent. Many Dutch names for locations, e.g. Nuyts Land, Eendrachtsland and De Wit's Land, disappeared or were Anglicised. For example Swaene-revier became Swan River. Some Dutch names have been retained, for example, as Arnhem Land and Cape Leeuwin.

Leeuwin Land was the old Dutch name for the Denmark area, in which the present Denmark River can be found. The river was discovered in 1829 by the naval doctor Thomas Braidwood Wilson, the first white man to explore the area. Wilson, who was assisted on his explorations by the Noongar man, Mokare, made reports about the soil and the enormous trees [4] and named the river after his colleague and friend, the English doctor Alexander Denmark. The name of Denmark has nothing to do with Denmark in Europe, although many workmen in the wood trade migrated from Scandinavia to the region when milling became a booming business.

Around 1885, timber leases were taken out in the Denmark River area, and 15 years later milling was at its peak with Denmark having a population of around 2,000. A railway line from Denmark to Albany was built to transport the karri timber, which was a wanted article all over the world. Many roads in London were paved with karri blocks, and British houses were built with timber from Denmark.[5] However, resource depletion soon resulted in a total collapse of the timber industry. The population declined dramatically, and started to revive only with the introduction of the Group Settlement Scheme in the 1920s. Small farms of 40 ha (100 acres) were cleared from woodland to create pasture for cattle, dairying and orcharding, mainly apples. Conditions were often poor and some of the small farmers could hardly survive. They worked in one of the timber mills operating around the middle of the 20th century. By the 1960s the population had increased to 1,500 and Denmark was becoming attractive to alternative life-stylers and early retirees. Intensive agriculturists such as wine growers had discovered the value of the rich karri loam for their vineyards. Riesling and Chardonnay were the first grapes grown on Denmark soil, soon followed by other varieties. Within 50 years the area became a wine subregion of critical acclaim, as part of the Great Southern Wine Region.[6][7] The first winery, Tinglewood, opened in 1976[citation needed], and by 2008, over twenty[citation needed] vineyards had been established around Denmark.

Tourism started when American soldiers, stationed in Albany during World War II, made outings to Denmark. After the war, Denmark became a popular holiday destination for Western Australians.

Australia Day in the Berridge Park on the Denmark River bank

Denmark is a rural town with timber milling, orcharding, beef cattle and dairy farming a. its primary industries. Soil and climate attract wine growers, with tourism being the fastest growing business in Denmark.[citation needed] There is limited commercial fishing as Denmark has no harbour. The town is home to the Denmark College of Agriculture which provides the specialist education of farming and farm related studies. Denmark was awarded the title of "Australia's Tidiest Town" in 1998.[citation needed]

Near the Denmark River mouth is a wooden Heritage Railway Bridge where several walking trails come together including the Bibbulmun Track, which runs from the Perth region to Albany and the Denmark-Nornalup Heritage Trail.

Denmark is on the Great Southern Highway, and is serviced by the TransWA public transport system. The town has an airstrip for small planes.

Denmark is surrounded by native woodland with a large variety of trees, including the eucalypts marri, karri, jarrah and red tingle. The latter can reach a height of 60 metres (200 ft). A distinctive local tree is the Red-flowering Gum.

There are many indigenous bird species, including Splendid Fairy-wrens, Emus, Australian White Ibis, Australian Magpies and Australian Ringnecks. Many species of reptiles including snakes and skinks can be found. Marsupials such as the Western Grey Kangaroo, the Southern Brown Bandicoot and the Common Brushtail Possum also live in the area.

The abundance of fish, squid and other marine life in the Denmark estuaries and along the coastline attracts Bottlenose Dolphins and seals; seasonally Southern Right Whales rest there during their long migrations to the north.

Actress Emma Booth was brought up in Denmark.[8]