The PDP-11's 16-bit addresses can address 64 KB. By the time the PDP-11 yielded to the VAX, 8-bit bytes and hexadecimal notation were becoming standard in the industry; however, numeric values on the PDP-11 always used octal notation, and the amount of memory attached to a PDP-11 was always stated as a number of words. The basic logical address space was 32K words, but the high 4K (addresses 160000 through 177777) was not populated because input/output registers on the bus responded to addresses in that range. So originally, a fully loaded PDP-11 had 28K words.

The processor reserved low memory addresses for two-word vectors that gave a program counter and processor status word with which to begin a service routine. When an I/O device interrupted a program, it would place the address of its vector on the bus to indicate which service routine should take control. The lowest vectors were service routines to handle various types of trap. Traps occurred on some program errors, such as arithmetic overflow or an attempt to execute an undefined instruction; and also when the program executed an instruction such as BPT, EMT, IOT, or TRAP to request service from the operating system.

The article PDP-11 describes how the 16-bit logical address space became an insurmountable limitation. During the life of the PDP-11, the following techniques were used to work around the limitation:

Sixteen-bit words were stored little-endian with least significant bytes first. Due to the popularity of the PDP-11, this format is still sometimes referred to as pdp-endian. Thirty-two-bit data—supported as extensions to the basic architecture, e.g., floating point in the FPU Instruction Set, double-words in the Extended Instruction Set or long data in the Commercial Instruction Set—was stored in more than one format, including an unusual middle-endian format.[1][2]

In the following sections, each item includes an example of how the operand would be written in assembly language for a hypothetical single-operand instruction with symbol OPR. Rn means one of the registers, written R0 through R7. (Rn) signifies the contents of that register.

The following eight modes can be applied to any general register. Their effects when applied to R6 (the stack pointer, SP) and R7 (the program counter, PC) are set out separately in the following sections.

In index and index deferred modes, X is a 16-bit value taken from a second word of the instruction. In double-operand instructions, both operands can use these modes. Such instructions are three words long.

When R7 (the program counter) is specified, four of the addressing modes naturally yield useful effects:

The only common use of absolute mode—whose syntax combines immediate and deferred mode—was to specify input/output registers, as the registers for each device had specific memory addresses. Relative mode has a simpler syntax and was more typical for referring to program variables and jump destinations. A program that used relative mode (and relative deferred mode) exclusively for internal references was position-independent; it contained no assumptions about its own location, so it could be loaded into an arbitrary memory location, or even moved, with no need for its addresses to be adjusted to reflect its location (relocated). In computing such addresses relative to the current location, the processor performed relocation on the fly.

Immediate and absolute modes are merely autoincrement and autoincrement deferred mode, respectively, applied to PC. Whether the auxiliary word is "in the instruction" as the above table says, or is found following an instruction that also increments PC past it, is subjective. As PC always points to words, the autoincrementation is always by 2.

R6, also written SP, is used as a hardware stack for traps and interrupts. A convention enforced by the set of modes the PDP-11 provided is that a stack grew downward—toward lower addresses—as items were pushed onto it. When a mode is applied to SP, or to any register the programmer elects to use as a software stack, the addressing modes have the following effects:

The PDP-11 operates on bytes and words. Bytes are specified by a register number—identifying the register's low-order byte—or by a memory location. Words are specified by a register number or by the memory location of the low-order byte, which must be an even number. In most instructions that take operands, bit 15 is set to specify byte addressing, or clear to specify word addressing. In the lists in the following two sections, the assembly-language programmer appended B to the instruction symbol to specify a byte operation; for example, MOV became MOVB.

The high-order four bits specify the operation to be performed (with bit 15 generally selecting word versus byte addressing). Two groups of six bits specify mode and register, as defined above, for each of two operands.

The ADD and SUB instructions use word addressing, and have no byte-oriented variations.

The high-order nine bits specify the operation to be performed (with bit 15 generally selecting word versus byte addressing). (There are not as many operations as it seems, as most combinations of the high-order four bits are taken by the double-operand instructions.) A single group of six bits specifies mode and register, as defined above, for the single operand.

The SWAB instruction—which swaps the high-order and low-order byte of the specified word—does not have two variations for byte- and word-addressing.

The high-order byte specifies the operation. The low-order byte is an offset relative to the current location of the program counter. The offset is a number of words (so it is multiplied by 2 before being combined with the program counter) and it is a signed number, enabling branches forward and backward in the code.

An additional conditional branch instruction is SOB (subtract one and branch), which is listed above under 2-operand instructions. The register operand is decremented. If the result is non-zero, the low six bits are taken as an unsigned number of instructions to branch backward.

The JSR instruction could save any register on the stack. Programs that did not need this feature specified PC as the register (JSR PC,address) and the routine returned using RTS PC. If a routine were called with, for instance, "JSR R4, address", then the old value of R4 would be on the top of the stack and the return address (just after JSR) would be in R4. This let the routine gain access to values coded in-line by specifying (R4)+, or to in-line pointers by specifying @(R4)+. The autoincrementation moved past these data, to the point at which the caller's code resumed. Such a routine would have to specify RTS R4 to return to its caller.

The four condition codes in the processor status word (PSW) are

This was the optional floating point processor option for 11/45 and most subsequent models.

The CIS was implemented by optional microcode in the 11/23/24, and by an add-in module in the 11/44 and in one version of the 11/74. It provided string and decimal instructions used by COBOL and Dibol.

The PSW was mapped to memory address 177 776, but instructions found on all but the earliest PDP-11s gave programs more direct access to the register.

On PDP-11s that provided multiple instruction spaces and data spaces, a set of non-orthogonal Move instructions gave access to other spaces. For example, routines in the operating system that handled run-time service calls would use these instructions to exchange information with the caller.

For example, the instruction MOV R5,-(R5) moves the value in a register to the address it points to, after decrementing it by two. A microprogrammed PDP-11 might completely evaluate the source operand before starting to evaluate the destination operand, so the value moved would not reflect the decrementation. A PDP-11 implemented by circuitry might perform the decrementation first, because doing so in general might save a memory cycle.

The PDP-11 operated at a priority level from 0 through 7, declared by three bits in the Processor Status Word (PSW).

To request an interrupt, a bus device would assert one of four common bus lines, BR4 through BR7, until the processor responded. Higher numbers indicated greater urgency, perhaps that data might be lost or a desired sector might rotate out of contact with the read/write heads unless the processor responded quickly. The printer's readiness for another character was the lowest priority (BR4), as it would remain ready indefinitely. If the processor were operating at level 5, then BR6 and BR7 would be in order. If the processor were operating at 3 or lower, it would grant any interrupt; if at 7, it would grant none. Bus requests that were not granted were not lost but merely deferred. The device needing service would continue to assert its bus request.

Whenever an interrupt exceeded the processor's priority level, the processor asserted the corresponding bus grant, BG4 through BG7. The bus-grant lines were not common lines but were a daisy chain: The input of each gate was the output of the previous gate in the chain. A gate was on each bus device, and a device physically closer to the processor was earlier in the daisy chain. If the device had made a request, then on sensing its bus-grant input, it could conclude it was in control of the bus, and did not pass the grant signal to the next device on the bus. If the device had not made a request, it propagated its bus-grant input to its bus-grant output, giving the next closest device the chance to reply. (If devices did not occupy adjacent slots to the processor board, "grant continuity cards" inserted into the empty slots propagated the bus-grant line.)

Once in control of the bus, the device dropped its bus request and placed on the bus the memory address of its two-word vector. The processor saved the program counter (PC) and PSW, and loaded new values from the specified vector. For a device at BR6, the new PSW in its vector would typically specify 6 as the new processor priority, so the processor would honor more urgent requests (BR7) during the service routine, but defer requests of the same or lower priority. With the new PC, the processor jumped to the service routine for the interrupting device. That routine operated the device, at least removing the condition that caused the interrupt. The routine ended with the RTI (ReTurn from Interrupt) instruction, which restored PC and PSW as of just before the processor granted the interrupt.

If a bus request were made in error and no device responded to the bus grant, the processor timed out and performed a trap that would suggest bad hardware. 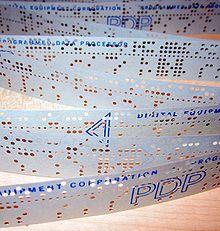 MACRO-11 is the assembly language for the PDP-11. It is the successor to PAL-11 (Program Assembler Loader), an earlier version of the PDP-11 assembly language without macro facilities. MACRO-11 was supported on all DEC PDP-11 operating systems. PDP-11 Unix systems also include an assembler (called "as"), structurally similar to MACRO-11 but with different syntax and fewer features.

A (false) folk myth is that the instruction set architecture of the PDP-11 influenced the idiomatic use of the B programming language. The PDP-11's increment and decrement addressing modes correspond to the −−i and i++ constructs in C. If i and j were both register variables, an expression such as *(−−i) = *(j++) could be compiled to a single machine instruction. Dennis Ritchie unambiguously contradicts this folk myth, noting that the PDP-11 did not yet exist at the time of B's creation. He notes however that these addressing modes may have been suggested by the auto-increment cells of the PDP-7, though the implementation of B did not utilize this hardware feature.[3] The C programming language did however take advantage of several low level PDP-11 dependent programming features, resulting in the propagation of these feature into new processors.[4]