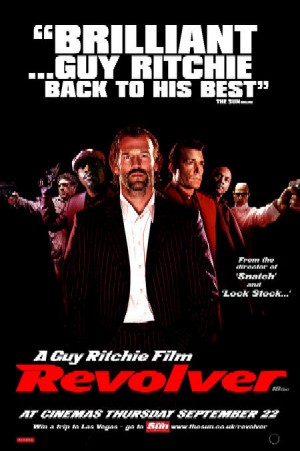 The film stars as Jake Green, as Dorothy Macha, and André Benjamin (a.k.a. "André 3000") as Avi. It centers around a revenge-seeking ster whose weapon is a universal that guarantees victory to its user, when applied to any game or . This is the third feature film by Ritchie which is centered on crime and professional criminals. It was released in UK theaters on , , but performed poorly at the box office. A reworked version

After spending seven years in solitary confinement and having his sister-in-law murdered, ster Jake Green () is out to get revenge on Dorothy Macha ().

Jake Green is a hotshot who has acquired a specific strategy (referred to as "the Formula"), that is supposed to lead its user to win every game, during his seven-year stint imprisoned in solitary confinement. The Formula itself was discovered by two unnamed men in adjacent cells either side of Jake's own. During the first five years of his seven-year sentence, the three men communicated their thoughts on confidence tricks and chess moves via messages hidden inside provisional books, such as 'The Mathematics of Quantum Mechanics'. They plan to leave their cells simultaneously, but end up leaving Jake behind, who ends up serving the remaining two years. He finds that all of his possessions and money have been taken by the two men with whom he had shared everything but, having the two men's Formula, he went about making a lot of money at various s. Two years later, Jake has garnered a reputation that leads many s to fear his freakishly good 'luck'. The Formula is seen to apply to any game, and is often exemplified by his apparent mastery of . The story revolves around Jake's epiphanic awakening, as he learns how to apply the Formula to the 'game' of life.

Jake goes to prison for seven years. While the reasons for his sentence are unspecified, it's implied that he was incarcerated due to the efforts of Dorothy Macha, a corrupt casino owner. Approximately two years after his prison release, Jake, Billy and their other brother Joe walk into one of Macha's s. "All the tables are closed" to Jake and company, and they are promptly called up to a private area of Macha's where a high rollers' game is currently taking place. Jake bets Macha a fortune on a chip toss, and wins. This hurts Macha. As Jake says "nothing hurts more than humiliation and a little money loss". Macha suspects that Jake, who seems unafraid of him, will be out for more revenge. As Jake and his brothers leave the casino, Jake collapses down the stairs unexpectedly and is rushed to the hospital. The doctors report he is very ill but do not disclose why he had the blackout. Macha puts out the order for a hit on Jake. Jake arrives home, without Billy, to be welcomed by one of Macha's hits. Jake is the only one who survives, being rescued by a mysterious individual called Zach (). Zach introduces him to his partner, Avi (André Benjamin). Jake finds out that the blackout occurred due to a blood disease which is causing his death within three days, and that Macha is after him. Avi says that only he and Zach can protect him and that, in return, Jake must give them his money to fund their enterprise.

Sam Gold is seen to be the 'king' in this chess game of gang warfare. He is the ultimate figure that all men are supposedly aspiring to be. Sam Gold is revealed to be an ultimately powerless cipher, whose power is granted only by those who invest in him. He represents ego and self-investment. He is the personification of greed. It is revealed that Avi and Zach were Jake's "neighbours" during his years of incarceration. They have forced Jake to "induce head pain to engage the enemy" by making him give his money away under the principle that "nothing hurts more than humiliation and a little money loss". They are inflicting this form of 'premature enlightenment' upon Jake because, according to them, he was not ready to hear how hard this process of liberation was going to be while in prison. It was because of this that they left without him.

Avi attempts to get Jake to understand the nature of the . He tells Jake "the greatest con that [the ego] ever pulled was making you believe that he is you." This is seen to be the 'ultimate con', in that no-one wants to sever their connection with their ego, because they refuse to challenge their own life-long investment in it. In the end, Jake also steps off the proverbial chess board by making a conscious effort to reverse everything that his nature (ego) tells him to do. This is seen to be the truest and most fundamental application of the Formula. The characters of Jake, Zach, Avi and Sorter () are seen to ultimately reject the ego's 'rules'. The character of Dorothy Macha is seen to succumb to them.

was, during the time of conceiving and executing the film, known to be involved in the philosophy and practice of a form of mysticism known as . [http://www.femalefirst.co.uk/celebrity/Guy+Ritchie+s+Kabbalah+movie-10553.html] The film itself is laced with references to Kabbalic ideas, symbols and numerological references. ["As early as 2003 Ritchie encountered trouble finding a studio to support Revolver. References to Kabbalah in the script made studios like Sony back off. Kabbalah has a reputation as a cult, they feared. .." - Mark Webster [http://www.the213.net/php/article.php?id=323] ]

The trinity of Zach, Jake and Avi are representative of Kabbalic right, center and left pillar energies, respectively. Avi is a Black man who is somewhat effeminate in his physical appearance, clothing and mannerisms. The 'left pillar' or 'left column' in Kabbalic traditions is often associated with 'the feminine' and with the colour black. Jake's surname is "Green", and the colour green is associated with the central column or pillar in Kabbalic traditions. Zach is a hefty, gargantuan, white man who 'dresses down' in a very archetypically 'masculine' way. Both masculinity and the colour white are associated with right column or right pillar energies in Kabbalic traditions. [] ["Blood is red, and blood belongs next to black. So, there's three columns: green is central column, white is right column, black is left column. Everything manifests in processes of three, so you've got: proton, neutron, electron; Sun, Earth, Moon; masculine, feminine, child. Wherever you're going to go, you're going to see a manifestation of '3'. So you've got Zach (or "Isaac"), Avi and Jake: a process of three. They represent positive, negative and fillament, where Jake is the central column. Blood is red, which belongs to the left column, black is extreme left column. So it's the idea that white blood cells are 'mercy', and red blood cells are 'judgement'. Right is positive and left is negative." - , "Revolver" DVD commentary.]

The number 32 comes up repeatedly. "The chess game has many mystical meanings. The Temple of Solomon was chequered like a chess board, which has 64 squares and 32 pieces." [, "Revolver" DVD Commentary] The elevator that Jake enters near the end of the movie has buttons for 32 floors. In numerology, its 'opposite' is said to be the number 23, which is commonly associated with 'The 23 Enigma' (which is the idea that everything in the observed universe is somehow related to the number 23). ["32 floors: 32 vertabrae in your back, 32 teeth in your mouth, 32 chess pieces on a chess board. On the same elevator the floor seems to be stuck between the 12 and the 14 floor placing Jake on the 13 floor." - , "Revolver" DVD commentary.] In the Kabbalah the number 13 represents the year where a child becomes a man and thus Jake was stuck on the 13 floor when he finally understood.

According to director , the music for the film was initially intended to follow in a similar vein to his previous crime movies, "" and "Snatch", in that it was to be primarily source-based (i.e. using non-original music). Those source tracks would all have been classical in nature. However, during the production process, Ritchie changed his mind and decided to score a majority of the film with original music, leaving only some small sections to non-original music tracks (such as the restaurant shoot-out during Lord John's attempted assassination of Dorothy Maccha). Ritchie selected to compose the score. [See "Revolver: Making The Music" by Jesse Salto.]

The music itself works as an experimental fusion piece, melding , and .

The DVD menus 'revolve' along the X and Y axes, reflecting the paradigm-shifting themes of the film.

Extra Features:
*Feature length audio commentary between Lance Lochner and director .
*"The Concept": an interview with director and editor James Herbert on the subject of the film's conceptual and editorial development.
*"The Game: The Making Of Revolver"
*Stills gallery (over 100 stills against film soundtrack).
*7 deleted scenes with director's commentary.
*Outtakes
*Music Trailer

Regional Format:
*"Revolver" is currently available in both Regions 1 & 2 on DVD.

The film was generally panned by critics: for example, it has been criticised on grounds of pretension and having an over-complicated plot by critics such as . Reviews were so poor in the UK that "" ran a story [cite web| url=http://media.guardian.co.uk/site/story/0,14173,1583256,00.html| title=How to flog a turkey| publisher=""] on how the distributor was able to attribute a quote to "" saying that the director was "back to his best". The quotation came from a section of the "Sun Online" website created by a PR agency on behalf of the film's distributors.

There were, however, some positive reviews as well. Mark R. Leeper conceded that it was "a film for a narrow audience", but said that he personally rather "liked it" and gave it a score of 7/10. [ [http://uk.rottentomatoes.com/click/movie-10004826/reviews.php?critic=columns&sortby=default&page=2&rid=1484160 ROTTEN TOMATOES: Revolver comes off like Jim Thompson crossed with Philip K. I liked it, because of the audacious solution, but I suspect that not many other people will agree ] ] According to Brian Orndorf, "Revolver" "is the perfect movie for those who like to crack things open and dig around the innards", saying that it "reminded [him] quite a bit of Richard Kelly’s film, "". He goes on to explain that "both films have a taste for the deliberately confusing, sharing scripts that take the viewer on a ride that requires much more than one simple viewing." [ [http://www.filmjerk.com/reviews/article.php?id_rev=750 FilmJerk.com - Reviews - Revolver ] ]