Public transport in Oradea (a city in Bihor County, Romania) consists by the tram and bus services run by Oradea Transport Local S.A. (commonly known as OTL) and the taxi service available for public use. The bus and tram network, although is fairly small for a city the size of Oradea, is somewhat efficient. 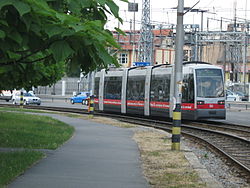 There are three tram lines in Oradea, and these run together for most of their journey. The lines are 1, 2 and 3. Lines 1 and 3 run together in a city loop, while Line 2 joins part of this loop in part of its journey. All quarters except Vie are served by trams. Trams do not actually run in the city centre, since this is a historic area with narrow streets. They do, however, run on the border of the city in a loop, and then continue through to all the residential areas and quarters.

In 2008 and 2009 10 new Siemens ULF trams were introduced to the Oradea tram system. The first Siemens tram was put in service in April 2008. 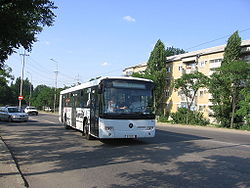 Passenger cab service is a widespread and relatively reliable form of door-to-door public transport in Oradea. Anyone can order a taxi to an address, pick one from the taxi rank or just stop one in the street if it has no passengers.

The city has some very strict rules in order to control the taxi services. The number of taxis is limited. All taxis must be completely or partially painted in yellow, must have passenger side airbag and air conditioning. They must also have a yellow sign on their top with a red and green light to indicate if they are free.

There are several private companies running taxi services in Oradea. The most important and reliable are City - Taxi, Fulger, VIP Taxi, Start and Hello Taxi.

The fleet used by the cab companies consists mainly of small or medium-sized private passenger.