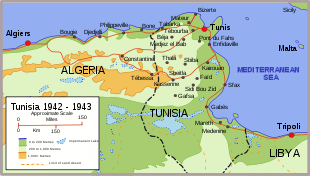 The Battle of Medenine, also known as Operation Capri, was a German counter-attack at Medenine, Tunisia, intended to disrupt and delay the 8th Army's attack on the Mareth Line. The German attack started on 6 March 1943, failed to make much impression and was abandoned at dusk on the same day. Over the next day or two, German forces withdrew northward.

After the Axis defeat at El Alamein, the German commander—Generalfeldmarshall Erwin Rommel—had executed a retreat into eastern Libya. This had been successful in that the Axis forces had avoided destruction. An attack on the Allied forces now on his western front in Tunisia was also successful and caused their withdrawal.

Rommel faced the 8th Army, which was now established at Medenine in eastern Tunisia and preparing for its assault on the Mareth Line.

Two German infantry divisions, the 90th and 164th Light, and the 10., 15. and 21. Panzerdivisions of the Deutsches Afrikakorps (estimated 200 tanks). The Spezia Division of the Italian 1st Army occupied the Mareth Line.[2]

At about 06:00 on 6 March, under cover of fog, Rommel attacked Medenine with three Panzer divisions. Montgomery had, however, been forewarned of the German attack by Enigma decrypts and had established strong defensive positions.[3] The 8th Army had massive force superiority, including large, concealed batteries of anti-tank guns. These guns included a few of the new 17-pounder guns. The British were also able to concentrate their artillery in divisional or corps strength.

Infantry probed the entire front. Tanks led the attack, closely followed by motorised infantry. The British and New Zealand artillery held their fire until the tanks were almost on the anti-tank guns, when the 25-pounder guns opened fire on the infantry, leaving the tanks isolated without infantry support. At 08:30, a group of 10 Panzer III tanks—advancing on Tadjera Kbir—were surprised by two 6-pounder anti-tank guns and mortars and half of the tanks were quickly destroyed. The enemy was beaten off and withdrew.

Another German force attempted to advance along the Foum Tatahouine to Medenine road. They were contained by British forces.

During the afternoon, heavy and accurate artillery fire disrupted German concentrations, in particular a large group of 1,000 infantry plus tanks just short of Tadjera Kbir. The artillery included a troop of captured German 88 mm (3.46 in) guns.

The attack had been beaten with the loss of 52 German tanks.

Luftwaffe attempts to support the attacks were ineffectual.

Over the following night, patrols were sent out to discover the likelihood of renewed attacks, but without incident. Over forty German tanks had been destroyed, so it was unlikely that they would have the strength for a repeat. Audible vehicle movements did suggest an attack, but in fact a withdrawal was in progress.

There were minor rearguard actions on 7-8 March, as the Germans withdrew to the Mareth Line and Gabès. Allied efforts to force further action were defeated by the weather and the speed of the withdrawal. The action was over by 10 March, although some heights were still occupied and there was sporadic long-range artillery fire.

The attack began extraordinarily well, but soon came up against strong British positions in hilly country, protected by mines and anti-tank guns…. Attack after attack was launched, but achieved no success…. it soon became clear that the attack had failed and there was nothing more to be done about it…. The attack had bogged down in the break-in stage and the action never had a chance of becoming fluid. The British commander had grouped his forces extremely well and had completed his preparations with remarkable speed. In fact the attack had been launched about a week too late…. We had suffered tremendous losses, including forty tanks totally destroyed. But the cruellest blow was the knowledge that we had been unable to interfere with Montgomery's preparations. A great gloom settled over us all. The Eighth Army's attack was now imminent and we had to face it. For the Army Group to remain in Africa was now plain suicide.

On 10 March, Rommel left Africa for the last time, leaving von Arnim in command. He had played little part in the planning or control of the battle. It showed. There had been no reconnaissance. Allied artillery was well hidden and well placed and the German tanks were unable to spot them. The defeat had been so comprehensive that it caused the Germans to question their security and Montgomery was rebuked for not taking greater steps to hide the source of his information[3].

On 6 March 1943, Bernard Montgomery wrote in a letter to Sir Alan Brooke, the Chief of the Imperial General Staff:

He is trying to attack me in daylight with tanks, followed by lorried infantry... It is an absolute gift, and the man must be mad.

Allied plans for the attack on the Mareth Line continued, virtually undisturbed.