Oleg Kimovich Vasiliev (Russian: Олег Кимович Васильев; born November 22, 1959) is a Russian pair skater who competed internationally for the Soviet Union. With partner Elena Valova, he is the 1984 Olympic Champion, 1988 Olympic silver medalist, and three-time World Champion (1983, 1985, 1988). Their coach throughout their career was Tamara Moskvina. After the pair ended their career, Vasiliev became a pair skating coach, leading the team of Tatiana Totmianina and Maxim Marinin to the 2006 Olympic title. 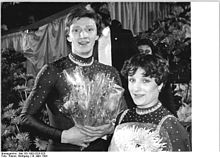 Vasiliev was born in Leningrad, Russia, to parents Ludmila Konstantinovna Vasilieva, a nurse, and Kim Mihailovich Vasiliev. He was a sickly child, and his doctor recommended he get exercise and fresh air. Thus he began skating at age five, and his health improved greatly.

Valova and Vasiliev enjoyed success throughout their career, winning gold at the 1984 Olympics and silver in 1988, as well as the 1983, 1985 and 1988 world championship titles. They competed in the amateur ranks from 1979 to 1988, and as professionals until 1998. They were the first Soviet skaters to skate in professional events after retiring from eligible competition. Oleg Vasiliev was awarded the Order of Friendship of Peoples.[1]

Vasiliev (far left) in 2004 with Tatiana Totmianina and Maxim Marinin.

Valova and Vasiliev were married from 1984-1992. He later married a woman named Valentina and had a daughter, Katia (or Katenka in the familiar form), but they have since divorced.[2]

Vasiliev moved to the United States in December 1997 and currently lives in Chicago, Illinois.