Marinin was born in Volgograd, Russia, and began skating at age four. After losing to the much younger Evgeni Plushenko, Marinin realized he would not be competitive in singles skating and elected to switch to pairs in 1993.[1] He met Tatiana Totmianina in 1995 at the Russian Nationals which he attended without a partner.[1] They began skating together in 1996, trained by Natalia Pavlova in Saint Petersburg.

Totmianina and Marinin made consistent progress on the world scene through the late 90's. After dating for a while, they ended their relationship but remained friends.[2] They left Pavlova just prior to the 2001 European Championships and moved to Chicago in the United States to train under 1984 Olympic pairs champion Oleg Vasiliev.[3][1][2]

Totmianina and Marinin won their first major title at the 2002 European Championships, and went on to finish 4th at the 2002 Winter Olympics in Salt Lake City. Twice in a row, they finished second at the World Championships to their Chinese rivals Shen Xue and Zhao Hongbo, before finally winning gold in 2004. The day after winning their first World title, Totmianina suffered a dislocated shoulder in practice.[4] They were unable to perform in the exhibition.

In November 2004, during the free skate at the 2004 Skate America in Pittsburgh, Marinin lost his balance while attempting a difficult lasso lift and Totmianina slammed to the ice head first.[5][6] She suffered a severe concussion and spent the night in a local hospital. Totmianina recovered from her injuries rapidly and was able to return to the ice within days. She often stated that she has no memory of the incident and this made it easy for her to return to the ice. Although Totmianina did not blame him, the accident weighed heavily on Marinin and when the pair returned to training, he was unable to lift her due to panic.[2] He began seeing a sport psychologist who helped him overcome it.[7] 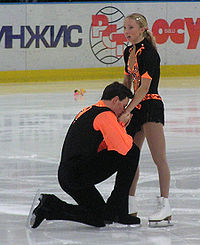 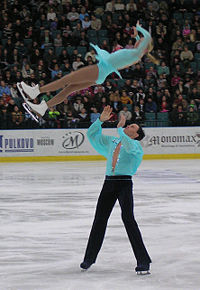 They returned to competition two months later in January 2005, winning gold at the Russian Nationals and then the European Championships.[8] In March, they competed at the World Championships, held in Moscow, Russia. They won their second consecutive World title easily, with a total score 10 points higher than the second place finishers.

Totmianina and Marinin dominated world competition from that point onward. In December 2005, Totmianina was hospitalized with a gall bladder problem.[9] They won their fifth consecutive European Championship the following month in January 2006. With their rivals Shen and Zhao recovering from an achilles injury, Totmianina and Marinin were the clear favorites for Olympic gold in Turin, Italy. They won the short program on February 11 and then the long program on February 13, capturing the 2006 Olympic pair skating title.

Totmianina and Marinin did not compete at the World Championships in March 2006. They later announced their retirement from competition. The pair toured with the Champions on Ice show, with other notable skaters including Michelle Kwan, Evgeny Plushenko, and Viktor Petrenko, among others.

With his girlfriend, Natalia Somova, a ballerina at the Stanislavski Moscow Theatre, he has a son, Artem,[10] who was born on September 29, 2007 in Krasnodar, Russia. The family lives in Moscow.