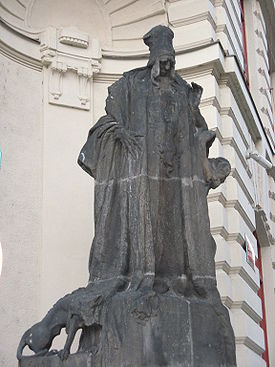 Ladislav Šaloun's statue popularly ascribed to Loew at the new town hall of Prague in the Czech Republic.

Judah Loew ben Bezalel, alt. Loewe, Löwe, or Levai, (c. 1520 – 17 September 1609)[1] widely known to scholars of Judaism as the Maharal of Prague, or simply The MaHaRaL, the Hebrew acronym of "Moreinu ha-Rav Loew," ("Our Teacher, Rabbi Loew") was an important Talmudic scholar, Jewish mystic, and philosopher who served as a leading rabbi in the city of Prague in Bohemia for most of his life.

Within the world of Torah and Talmudic scholarship, he is known for his works on Jewish philosophy and Jewish mysticism and his work Gur Aryeh al HaTorah, a supercommentary on Rashi's Torah commentary.

The Maharal is the subject of a nineteenth-century legend that he created The Golem of Prague, an animate being fashioned from clay.

Rabbi Loew is buried at the Old Jewish Cemetery, Prague in Josefov, where his grave and intact tombstone can still be visited. His descendants' surnames include Loewy, Loeb, Lowy, Oppenheimer, Pfaelzer, and Keim. 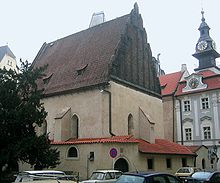 The Old New Synagogue, Prague where he officiated. 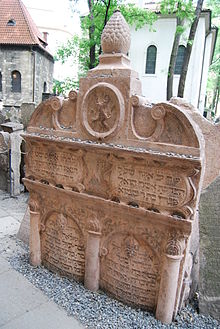 His tombstone in the Old Jewish Cemetery, Prague.

The Maharal was probably born in Poznań[2] (Poland, though Perels[3] lists the birth town - mistakenly[2] - as Worms, Germany) to Rabbi Bezalel (Loew), whose family originated from the German town of Worms. His birth year is uncertain, with different sources listing 1512,[3] 1520[4] and 1526.[2][5] His uncle Jacob was Reichsrabbiner ("Rabbi of the Empire") of the Holy Roman Empire, his brother Chaim of Friedberg a famous rabbinical scholar. Traditionally it is believed that the Maharal's family descended from the Babylonian Exilarchs (during the era of the geonim) and therefore also from the Davidic dynasty.[6] There is no documented evidence of his having received formal religious education, leading scholars to conclude that he was an extremely gifted autodidact.[7]

He was independently wealthy, probably as a result of his father's successful business enterprises. He accepted a rabbinical position in 1553 as Landesrabbiner of Moravia at Mikulov (Nikolsburg), directing community affairs but also determining which tractate of the Talmud was to be studied in the communities in that province. He also revised the community statutes on the election and taxation process. Although he retired from Moravia in 1588 at age 60, the communities still considered him an authority long after that.

One of his activities in Moravia was the rallying against slanderous slurs on legitimacy (Nadler) that were spread in the community against certain families and could ruin the finding of a marriage partner for the children of those families. This phenomenon even affected his own family. He used one of the two yearly grand sermons (between Rosh Hashanah and Yom Kippur 1583) to denounce the phenomenon.

He moved back to Prague in 1588, where he again accepted a rabbinical position, replacing the retired Isaac Hayoth. He immediately reiterated his views on Nadler. On 23 February 1592, he had an audience with Emperor Rudolf II, which he attended together with his brother Sinai and his son-in-law Isaac Cohen; Prince Bertier was present with the emperor. The conversation seems to have been related to Kabbalah (Jewish mysticism) a subject which held much fascination for the emperor.

In 1592, the Maharal moved to Poznań, where he had been elected as Chief Rabbi of Poland. In Poznań he composed Netivoth Olam and part of Derech Chaim (see below).

Towards the end of his life he moved back to Prague, where he died in 1609. He was buried in the Old Jewish Cemetery, Prague.

His name "Löw" or "Loew", derived from the German Löwe, "lion" (cf. the Yiddish Leib of the same origin), is a kinnuy or substitute name for the Hebrew Judah or Yehuda, as this name - originally of the tribe of Judah - is traditionally associated with a lion. In the Book of Genesis, the patriarch Jacob refers to his son Judah as a Gur Aryeh, a "Young Lion" (Genesis 49:9) when blessing him [1]. In Jewish naming tradition the Hebrew name and the substitute name are often combined as a pair, as in this case. The Maharal's classic work on the Rashi commentary of the Pentateuch is called the Gur Aryeh al HaTorah, in Hebrew: "Young Lion [commenting] upon the Torah".

Coat of arms of Bohemia

The Maharal's tomb in Prague is decorated with a heraldic shield with a lion with two intertwined tails (queue fourchee), alluding both to his first name and to Bohemia, the arms of which has a two-tailed lion.

It is unknown how many Talmudic rabbinical scholars the Maharal taught in Moravia, but the main disciples from the Prague period include Rabbis Yom Tov Lipmann Heller and David Ganz. The former promoted his teacher's program of regular Mishnah study by the masses, and composed his Tosefoth Yom Tov (a Mishnah commentary incorporated into almost all published editions of the Mishnah over the past few hundred years) with this goal in mind. David Ganz died young, but produced the work Tzemach David, a work of Jewish and general history, as well as writing on astronomy; both the MaHaRal and Ganz were in contact with Tycho Brahe, the famous astronomer.

In the words of a modern writer, the Maharal "prevented the Balkanization of Jewish thought" (Rabbi Yitzchak Adlerstein 2000, citing Rabbi Nachman Bulman).

His works inspired the Polish branch of Hasidism, as well as a more recent wave of Torah scholars originating from Lithuania and Latvia, most markedly Rabbi Eliyahu Eliezer Dessler (1892–1953) as well as Rabbi Abraham Isaac Kook (1864–1935). A more recent authority who had roots in both traditions was Rabbi Isaac Hutner (1906–1980). Rabbi Hutner succinctly defined the ethos of the Maharal's teachings as being Nistar BeLashon Nigleh, meaning (in Hebrew): "The Hidden in the language of the Revealed". That is, the Maharal couched kabbalistic ideas in non-kabbalistic language. As a mark of his devotion to the ways of the Maharal, Rabbi Hutner bestowed the name of the Maharal's key work the Gur Aryeh upon a branch of the yeshiva he headed when he established its kollel (a yeshiva for post-graduate Talmud scholars) which then became a division of the Yeshiva Rabbi Chaim Berlin in New York during the 1950s, known as Kollel Gur Aryeh. Both of these institutions, and the graduates they produce, continue to emphasize the serious teachings of the Maharal. Rabbi Hutner in turn also maintained that Rabbi Samson Raphael Hirsch (1808–1888) (Germany, 19th century) must also have been influenced by the Maharal's ideas basing his seemingly rationalistic Weltanschauung on the more abstract and abstruse teachings of the hard-to-understand Jewish Kabbalah.

Rabbi Judah Loew was not a champion of the open study of Kabbalah as such, and none of his works are in any way openly devoted to it. Instead, what they attempt to do is to make the ideas of the Kabbalah (which he held to be the most deeply true of all the Torah) accessible to the average educated reader, by presenting them in a rigorously philosophical form, couched in terms that are accessible to the public. According to R. Loew, only the greatest of Torah scholars are able to perceive the full intent of the Kabbalistic works in their complex entirety. Therefore, although kabbalistic doctrine permeates his writings, it is always presented in a rational and philosophic form. His main kabbalistic influences appear to have been the Zohar, Sefer Yetzirah, and traditions of the Chassidei Ashkenaz, as Lurianic Kabbalah had not by that time reached Europe.

Faced with the Aristotelian interpretation of Talmudic Aggadot by Azariah di Rossi, he was indignant at what he termed the trivialization of the Sages' deep wisdom. In his work B'er HaGolah he vigorously disproves all of di Rossi's theses, sternly upholding the subtly allegorical nature of Aggadah and demonstrating its independence from (and superiority to) the superficial observations of natural science. At the same time he was entirely in favor of scientific research, so long as the researcher did not use his observations as permission to contradict the final authority of divine revelation. His constant thesis is that the Talmudic, Midrashic, and Aggadic teachings refer always to matters far beyond the competence of natural science.

Among his many descendants were Schneur Zalman of Liadi, founder of Chabad Hasidism. Through him, he is the ancestor of many prominent later Jewish individuals, including Menachem Mendel Schneerson, seventh Rebbe of Lubavitch, and Yehudi Menuhin, the famous violinist. Maharal is also the ancestor of Rebbe Nachman of Breslov.

Legend of the golem

The Maharal is the subject of a legend concerning the creation of a golem, a creature which he made out of clay to defend the Jews of the Prague Ghetto from antisemitic attacks, particularly blood libels. He is said to have used mystical powers based on the esoteric knowledge of how God created Adam.[8] The general view of historians and critics is that the legend is a German literary invention of the early 19th century. It has been repeated and adapted many times since.

His works on the holidays bear titles that were inspired by the Biblical verse in I Chronicles 29:11: "Yours, O Lord, are the greatness, and the might, and the glory, and the victory, and the majesty, for all that is in the heavens and on the earth [is Yours]; Yours is the kingdom and [You are He] Who is exalted over everything as the Leader." The book of "greatness" (gedula) on the Sabbath was not preserved, but the book of "power" (gevurah) is Gevurath Hashem, the book of glory is Tif'ereth Yisrael, and the book of "eternity" or "victory" (netzach) is Netzach Yisrael.

In April 1997 Czech Republic and Israel issued a joint set of stamps, one of which featured the tombstone of Loew.[9][10][11] In May 2009 the Czech Post issued a stamp commemorating the 400th anniversary of Loew’s death.[12] In June 2009 the Czech Mint issued a commemorative coin marking the same milestone.[13]