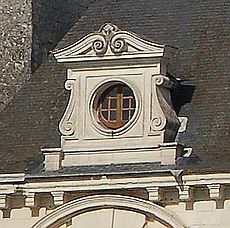 An oeil-de-boeuf window of the Château de Chenonceau, France

Oeil-de-boeuf, also œil de bœuf, (French, "bull's eye") is a term applied to a relatively small oval window, typically for an upper storey, and sometimes set on a roof slope as a dormer, or above a door to give light. Windows of this type are commonly found in the grand architecture of Baroque France. The term is also so often applied to similar round windows that this must be considered part of the usage. It is sometimes anglicized as an "ox-eye window". The term initially applied to horizontal oval windows, but is also used for vertical ones.[1]