The Fork-tailed Storm Petrel (Oceanodroma furcata) is a small seabird of the storm-petrel family Hydrobatidae. It is 20–23 cm in length, with a wingspan of 46 cm. It is the only Storm-petrel gray in color.

In North America, it breeds on islands on the Aleutian Islands off Alaska, and on islands along the coasts of British Columbia in Canada and the Pacific Northwest in the United States. The Fork-tailed Storm Petrel also breeds on the Kuril Islands off Kamchatka. This bird breeds in rock crevices or small burrows in soft earth and lays a single white egg. Like most petrels, its walking ability is limited to a short shuffle to the burrow. It is a colonial nester.

The forked tail is more easily seen from above 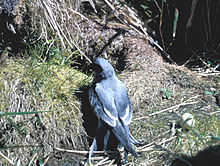 It spends the rest of the year at sea, usually spending its time over colder waters. It can be seen well offshore down the Pacific coast to central California on the North American side, and down to Japan on the Asian side.

It feeds on mainly planktonic crustaceans, small fish and squid. It will also take offal. It feeds similarly to other Storm-petrels, picking food of the surface of the water while in flight. This bird does follow ships.