The problem of predicting nucleic acid secondary structure is dependent mainly on base pairing and base stacking interactions; many molecules have several possible three-dimensional structures, so predicting these structures remains out of reach unless obvious sequence and functional similarity to a known class of nucleic acid molecules, such as transfer RNA or microRNA, is observed. Many secondary structure prediction methods rely on variations of dynamic programming and therefore are unable to efficiently identify pseudoknots.

While the methods are similar, there are slight differences in the approaches to RNA and DNA structure prediction. In vivo, DNA structures are more likely to be duplexes with full complementarity between two strands, while RNA structures are more likely to fold into complex secondary and tertiary structures such as in the ribosome, spliceosome, or tRNA. This is partially because the extra oxygen in RNA increases the propensity for hydrogen bonding in the nucleic acid backbone. The energy parameters are also different for the two nucleic acids.

A common problem for researchers working with RNA is to determine the three-dimensional structure of the molecule given just the nucleic acid sequence. However, in the case of RNA much of the final structure is determined by the secondary structure or intra-molecular base-pairing interactions of the molecule. This is shown by the high conservation of base-pairings across diverse species.

The most stable structure

Secondary structure of small RNA molecules is largely determined by strong, local interactions such as hydrogen bonds and base stacking. Summing the free energy for such interactions should provide an approximation for the stability of a given structure. To predict the folding free energy of a given secondary structure, an empirical nearest-neighbor model is used. In the nearest neighbor model the free energy change for each motif depends on the sequence of the motif and of its closest base-pairs.[1] The model and parameters of minimal energy for Watson–Crick pairs, GU pairs and loop regions were derived from empirical calorimetric experiments, the most up-to-date parameters were published in 2004,[2] although most software packages use the previous set assembled in 1999.[3]

The ﬁrst and the most popular method for finding the most stable structure is a dynamic programming algorithm.[5][6] One of the first attempts to predict RNA secondary structure was made by Ruth Nussinov and co-workers who used the dynamic programming method for maximizing the number of base-pairs.[5] However, there are several issues with this approach: most importantly, the solution is not unique. Nussinov et al. published an adaptation of their approach using a simple nearest-neighbour energy model in 1980.[6] In 1981, Michael Zuker and Patrick Stiegler proposed using a slightly refined dynamic programming approach to modelling nearest neighbor energy interactions that directly incorporates stacking into the prediction.[7]

Dynamic programming algorithms are commonly used to detect base pairing patterns that are "well-nested", that is, form hydrogen bonds only to bases that do not overlap one another in sequence position. Secondary structures that fall into this category include double helices, stem-loops, and variants of the "cloverleaf" pattern found in transfer RNA molecules. These methods rely on pre-calculated parameters which estimate the free energy associated with particular types of base-pairing interactions, including Watson-Crick and Hoogsteen base pairs. Depending on the complexity of the method, single base pairs may be considered as well as short two- or three-base segments to incorporate the effects of base stacking. This method cannot identify pseudoknots, which are not well nested, without substantial algorithmic modifications that are extremely computationally expensive.[8]

The accuracy of RNA secondary structure prediction from a single sequence by free energy minimization is limited by several factors: 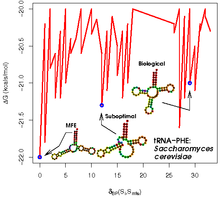 Sequence covariation methods rely on the existence of a data set composed of multiple homologous RNA sequences with related but dissimilar sequences. These methods analyze the covariation of individual base sites in evolution; maintenance at two widely separated sites of a pair of base-pairing nucleotides indicates the presence of a structurally required hydrogen bond between those positions. The general problem of pseudoknot prediction has been shown to be NP-complete.[13]

A practical heuristic approach is to use multiple sequence alignment tools to produce an alignment of several RNA sequences, to find consensus sequence and then fold it. The quality of the alignment determines the accuracy of the consensus structure model. Consensus sequences are folded using various approaches similarly as in individual structure prediction problem. The thermodynamic folding approach is exemplified by RNAalifold program.[15] The different approaches are exemplified by Pfold and ILM programs. Pfold program implements a SCFGs.[16] ILM (iterated loop matching) unlike the other algorithms for folding of alignments, can return pseudocnoted structures. It uses combination of thermodynamics and mutual information content scores.[17]

Evolution frequently preserves functional RNA structure better than RNA sequence.[15] Hence, a common biological problem is to infer a common structure for two or more highly diverged but homologous RNA sequences. In practice, sequence alignments become unsuitable and do not help to improve the accuracy of structure prediction, when sequence similarity of two sequences is less than 50%.[18]

Structure-based alignment programs improves the performance of these alignments and most of them are variants of the Sankoff algorithm.[19] Basically, Sankoff algorithm is a merger of sequence alignment and Nussinov [5] (maximal-pairing) folding dynamic programming method.[20] Sankoff algorithm itself is a theoretical exercise because it requires extreme computational resources ( (O(n3m) in time, and O(n2m) in space, where n is the sequence length and m is the number of sequences). Some notable attempts at implementing restricted versions of Sankoff's algorithm are Foldalign,[21][22] Dynalign,[23][24] PMmulti/PMcomp,[20] Stemloc,[25] and Murlet.[26] In these implementations the maximal length of alignment or variants of possible consensus structures are restricted. For example, Foldalign focuses on local alignments and restricts the possible length of the sequences alignment.

Once secondary structure of RNA is known, the next challenge is to predict tertiary structure. The biggest problem is to determine the structure of regions between double stranded helical regions. Also RNA molecules often contain posttranscriptionally modified nucleosides, which because of new possible non-canonical interactions, cause a lot of troubles for tertiary structure prediction.[28][29][30][31]