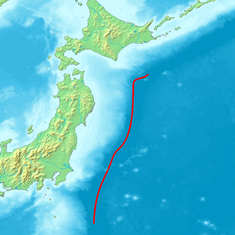 The Japan Trench, where the Pacific Plate slides beneath the Okhotsk Plate is the cause of the Northeastern Japan Arc

Northeastern Japan Arc also Northeastern Honshū Arc, is an island arc on the Pacific Ring of Fire. The arc runs north to south along the Tohoku region of Honshū, Japan. It is the result of the subduction of the Pacific Plate underneath the North American Plate at the Japan Trench. The southern end of the arc converges with the Southwestern Japan Arc and the Izu-Bonin-Mariana Arc at the Fossa Magna at the east end of the Itoigawa-Shizuoka Tectonic Line (ITIL). This is the geologic border between eastern and western Honshū. Mount Fuji is at the point where these three arcs meet. To the north, the Northeastern Japan arc extends through the Oshima Peninsula of Hokkaidō. The arc converges in a collision zone with the Sakhalin island arc and the Kuril arc in the volcanic Ishikari Mountains of central Hokkaidō. This collision formed the Teshio and Yubari Mountains.

The outer arc ranges are the Kitakami and the Abukuma Mountains. These mountains are made from pre-tertiary rock. The mountains rose in the Cenozoic and have since been worn smooth by erosion.