No Devolución is the sixth studio album by the American rock band Thursday. The record was released through Epitaph Records on April 12, 2011.[2] The musical style on No Devolución is a departure from the more traditional post-hardcore sound on Thursday's earlier records, and instead explores darker and more atmospheric tones.

Thursday entered Tarbox Road Studios in Fredonia, New York with producer Dave Fridmann in July 2010.[3] Fridmann had previously produced the band's previous two studio albums: 2006's A City by the Light Divided and 2009's Common Existence.[3] In a press release for the album, vocalist Geoff Rickly commented, "We've worked with Dave Fridmann before, but this is definitely the most we've ever clicked with him."[4] Fridmann was also inspired by the new direction Thursday was taking their music, and assisted the band in taking their music to new areas.[5]

Thursday entered the studio without any demos and impulsively wrote No Devolución on the spot.[6] Within a week the band had a full album written — a dramatically shorter time frame for Thursday as their previous albums had taken between six months and a year to compose.[5] In an effort to "[keep] the songs fresher," recording was performed in several two-week periods with a month off in between sessions.[6] The album's closing song "Stay True" was an improvised studio warm-up song based around a guitar part. Each day a new variation of the instrumental song was preformed and recorded live, with some versions lasting up to 20 minutes. The nearly eight-minute track that appears on No Devolución was Thursday's favorite version of the song, and vocals were later recorded for it.[7] Rickly also recorded some of his vocal parts in the forest that surrounds Tarbox Road Studios.[6][8]

"There's a lot of breakup records out there that only address the end of relationships, and I think the theme of devotion doesn't get explored that often. If devotion is the theme, the new record is a prism that's being used to refract all of its different aspects."

Musically, the record has been described as being atmospheric, dark and moody.[4][6] Unlike previous Thursday albums, Geoff Rickly did not compose any guitar parts for No Devolución. He wanted to let the members "who actually do the playing on the album [take] charge," and allow them to experiment with "new sounds and directions."[5] According to Rickly, each song on the album explores its own musical direction and "vibe" resulting in a collection of sonically diverse songs.[5] The music is also a departure from the sound found on Thursday's earlier albums. This idea is supported by the album title which translates from Spanish to "no returns."[2] The vocal style has also evolved from previous Thursday albums. Rickly described his singing style as "desperate" and at the top of his range in the past, but for No Devolución he gives a more "sung delivery" that better paired with "beautiful passages."[9]

While writing for No Devolución, Rickly's marriage was described as being "on the rocks," which had an effect on some of the lyrics.[6] All of the songs center themselves around the concept and theme of devotion. The song "No Answers" analyses the difficulties in maintaining a friendship with a former lover. According to Rickly, after being in a relationship with someone for an extended period of time, "there's more important levels to the relationship than simple romance."[5] Another common lyrical theme on No Devolución is how religious symbols can inadvertently divide the masses, which is most exemplified on the song "A Gun in the First Act."[5] The song "Stay True" was written about the hardcore group Touché Amoré—a group that Rickly knows through his vinyl-only label, Collect Records. He stated, "In thinking about what I wish for them, their band and all the mistakes I hope they don't make I recalled all the mistakes I had made."[9]

Rickly noted that the end of Turnpike Divides has a similar lyrical structure to Shudder to Think's "X-French Tee Shirt". Rickly wanted to do a long, complex circular melody which Fridman noted was similar to what OK Go tried on another song. [10]

In early 2011, Thursday toured North America with Underoath. The tour marked the tenth anniversary for their second studio album Full Collapse, which was performed in its entirety on all dates in celebration.[11] A 7" vinyl split single featuring Underoath's "Paper Lung" from their 2010 album Ø (Disambiguation) and Thursday's "Past and Future Ruins" from their No Devolución was released as a tour-exclusive item in limited quantities.[12] Also during this tour, Thursday held a contest in which six winners were chosen per tour date to preview select songs from No Devolución.[12] 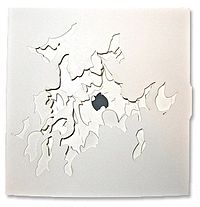 Image of the No Devolución limited edition packaging.

On February 1, 2011 the song "Magnets Caught in a Metal Heart" was digitally previewed via online streaming. Thursday intentionally selected this song to preview first because it was the most radically different song off of No Devolución when compared to their older material. Geoff Rickly described releasing a heavier song as "false advertising," and by releasing "Magnets Caught in a Metal Heart" the group would send the message to their fans: "You're not going to get the record you think you're going to get."[2] The song "Past and Future Ruins" became available for online streaming on February 22, 2011,[13] and "No Answers" became available the following month on March 22.[14]

No Devolución was released on April 12, 2011 through Epitaph Records in CD, 2×LP and digital formats. There was also a limited edition CD version designed by paper craft artist Mia Pearlman, who also created the art that was used for the packaging of the standard releases. The limited edition features layers of solid bleached sulphate paper with a different laser cut design on each layer to where "light will shine through the CD hole."[15] It was limited to 500 pieces and individually hand signed and numbered by Pearlman.[16]

All music by Thursday, all lyrics by Geoff Rickly.[1]