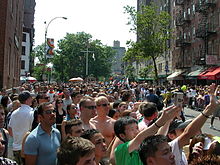 The Gay Pride March is an annual march more commonly referred to as the Pride Parade in New York City, traversing southward down Fifth Avenue and ending at Greenwich Village. The March passes by the site of the Stonewall Inn on Christopher Street, location of the 1969 police raid which launched the modern Gay Rights Movement.[1]

The first NYC Gay Pride March was held in 1970 and is the oldest gay pride parade.[2] The March has been and will continued to be called a March not a Parade until the organizers believe there is full equality for the LGBTQ community.[3]

The parade's organizer, Heritage of Pride (HOP), is a wholly volunteer-managed, non-partisan, tax-exempt, non-profit organization that organizes lesbian, gay, bisexual and transgender (LGBT) pride events in New York City to commemorate the Stonewall riots. HOP is one of the few LGBT organizations that is run at the grass-roots level. HOP welcomes the participation of all, regardless of age, creed, gender, gender identification, HIV status, national origin, physical, mental or developmental ability, race, or religion.

In 2019, the 50th anniversary of the Stonewall riots will take place. Heritage of Pride is working on organizing an appropriate series of addtional events to commemorate the milestone and accomidate the expected influx of visitors to New York City from around the world.

2009 marked the occasion of the 40th Anniversary of the Stonewall Riots in New York City. Accordingly, HOP in conjunction with NYC local government promoted the event for people from around the world to attend. Grand Marshals that year were: