The Marriage Equality Act is a 2011 New York State law that allows gender-neutral marriages for both same- and opposite-sex couples, while prohibiting state and local courts and governments from penalizing religious and religious-supervised institutions, their employees, or clergy for refusing to sanctify or recognize marriages in contradiction with their religious doctrines, or for refusing to provide services and accommodations for such weddings.[1] It was introduced to the New York State Assembly by Assemblyman Daniel O'Donnell. It was signed into law on June 24, 2011, and took effect on July 24, 2011.

The moment of the Marriage Equality Act vote in balcony of the capital building in Albany, New York, the evening of July 24, 2011 photographed by Celebration Chapel of Kingston, NY.[2] Persons in foreground are wearing t-shirts bearing the logo of the Human Rights Campaign, one of many organizations backing the bill.
Main article: Same-sex marriage in New York

Before July 24, 2011, New York only allowed for recognition of legal same-sex marriages performed in other states of the union[3][4] and countries where same-sex marriage is legal, such as Canada and Spain, while also limiting legal recognition of in-state same-sex relationships to the rights of unregistered cohabitation; numerous municipalities afford domestic partnership registries to residents engaged in same-sex relationships.

The bill made New York the sixth state in the United States to legalize and retain the in-state certification and legalization of same-sex marriage (excluding California, which legalized and performed some 18,000 same-sex marriages before a ban on further marriages was promulgated through referendum), and also made the state the most populous in the union to do so.[5]

A similar bill which would legalize same-sex marriage performances in New York was passed by the State Assembly in 2007 by a majority of 85-61,[6] but languished in the Republican-controlled Senate before dying and being returned to the Assembly.[6] Then-governor Eliot Spitzer promoted the bill among lawmakers in Albany.

Three Democratic senators who voted against the December 2009 bill, Shirley Huntley, Carl Kruger and Joseph Addabbo Jr., announced their support for the 2011 bill on June 13.[12] James Alesi became the first Republican senator to announce his support for the bill,[12] and Roy McDonald became the second on June 14, narrowing the requirement for passage to just one.[13]

Democratic senator Rubén Díaz, Sr. was a vocal opponent of the legalization and resigned from the Minority Caucus to demonstrate his opposition to its position on the legislation.[14] The majority of the Republican caucus in the Senate voiced opposition to any attempt and the Conservative Party of New York stated that it will not endorse the reelection of any senator who votes in favor of legalization. On Friday, June 24, 2011, Republican Senator Andrew Lanza announced that he would vote against the bill.[15]

A Senate vote was delayed while closed-door negotiations took place among the leadership of the Senate, the Governor and the Republican caucus. The bill was made part of the "controversial calendar" which was eventually moved to the Friday following the intended end of the legislative session on June 20. From June 15 to June 24, protests both for and against the vote took place inside and around the capital complex, and organizations such as the Human Rights Campaign, New Yorkers for Marriage Equality, and the National Organization for Marriage took part in the rallies.

As thousands of New York residents lobbied the Senators, Senator Greg Ball invited the public to participate in an online poll on Twitter and Facebook. Ball eventually decided to vote against the bill. On June 24, Majority Leader Dean Skelos announced the decision to have the Senate consider the legislation as the final bill of the legislative session. Rallies took place in Albany and New York City, with crowds gathered on Christopher Street in front of the Stonewall Inn (the site of the 1969 Stonewall riots and the origin of the first Gay Pride March) in Greenwich Village, Manhattan.

While the Senate met, the Assembly voted on a set of amendments developed to win the support of Senators concerned about the Act's impact on religion-based opposition to same-sex marriage, which detailed exemptions for religious and benevolent organizations. The exemptions are tied to an inseverability clause, ensuring that if the religious exemptions were successfully challenged in court, then the entire legislation and thus legal same-sex marriage would be invalid.[1] It passed with little debate. The Senate approved the amendments to the bill on a vote of 36-26.

In the final vote on the bill itself, both Thomas Duane, co-sponsor of the Senate bill, and Diaz, opponent of the bill, spoke in defense of their positions. Republican senators Mark Grisanti and Stephen Saland joined Alesi and McDonald as the only Republicans supporting the legislation, while Diaz cast the only Democratic vote against the bill. 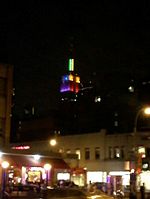 The Empire State Building lit in rainbow colors following the passage of the Marriage Equality Act.

Two town clerks, one in Barker and another in Granby, resigned citing their moral and religious objections to signing marriage certificates for same-sex couplees.[34] For the same reason, a clerk in Guilderland announced she would continue in her position but would no longer officiate at any weddings, allowing another official to do so in her stead.[35] The town clerk of Volney said she will not sign marriage certificates for same-sex couples unless forced to do so.[36] Kathleen Rice, the district attorney for Nassau County, warned all town clerks within her jurisdiction they could face criminal charges if any refused to perform their duties with respect to same-sex marriages.[37]

Following the passage of the Marriage Equality Act, a Marist Poll reported that 55% of New York adults support the legalization of same-sex marriage, and 63% don't want the law overturned.[43]

Sen. Ruben Diaz, Sr., a Democrat and the most prominent opponent of the Act, announced at a rally on July 24, 2011, that he would file a lawsuit alleging that the same-sex marriages performed on that day were illegal. Diaz said the lawsuit would challenge judicial waivers that allowed a same-sex couple to marry on the same day they applied for a marriage license.[44]

On July 25, 2011, the organization New Yorkers for Constitutional Freedoms, along with the Liberty Counsel, filed a lawsuit in the New York Supreme Court against the New York Senate and other state offices seeking an injunction against the Act. The lawsuit alleges that:[45][46]