The Namgyal dynasty of Ladakh was founded by Bhagan, a Basgo king, who reunited Ladakh by overthrowing the king of Leh. He took the surname Namgyal (meaning victorious) and founded a new dynasty which still survives today. King Tashi Namgyal (1555-1575) successfully managed to repel most Central Asian raiders, and built a royal fort on the top of the Namgyal Peak. Tsewang Namgyal temporarily extended his kingdom as far as Nepal.

During the reign of Jamyang Namgyal, concerted efforts were made to convert Ladakh to Islam by destroying Buddhist artifacts. Today, few gompas exist from before this period.

The Territorial Extent of Ladakh during the period of King Nyimagon about 975 A. D.- 1000 A.D. as depicted in A History of Western Tibet by A.H. Francke, 1907 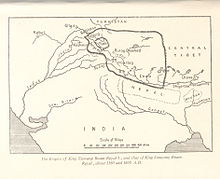 Sengge Namgyal (r. 1616-1642), known as the 'Lion' King made efforts to restore Ladakh to its old glory by an ambitious and energetic building program including the Leh palace and the rebuilding of several gompas, the most famous of which are Hemis and Hanle.[1]

He expanded the kingdom into Zanskar and Spiti, but was defeated by the Mughals, who had already occupied Kashmir and Baltistan. His son Deldan Namgyal (1642-1694) had to placate the Mughal emperor Aurangzeb by building a mosque in Leh. However, he successfully defeated the Mughal army in Baltistan. He sided with Bhutan in a religious dispute between Tibet and Bhutan, which resulted in an attempted invasion by the fifth Dalai Lama. Kashmiri help restored Ladakhi rule at a price - the building of a mosque in Leh and the conversion of the Ladakhi king to Islam. Also, all of Ladakh's valuable pashmina wool had to go to Kashmir. The Treaty of Temisgam in 1684 settled the dispute between Tibet and Ladakh, but its independence was seriously restricted.

By the beginning of the 19th century, the Mughal empire had collapsed and Sikh rule had been established in Punjab and Kashmir. However the Dogra region of Jammu remained under its Rajput rulers, the greatest of whom was Maharaja Gulab Singh (1792-1857)——his General Zorawar Singh invaded Ladakh in 1834. King Tshespal Namgyal was dethroned and exiled to Stok.