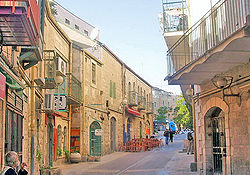 Nahalat Shiv'a was the third neighborhood built outside the Old City of Jerusalem in the 1860s. Today it is a crowded pedestrian promenade lined with sidewalk cafes.

Nahalat Shiv'a was the third residential neighborhood built outside the city walls. It was founded in 1869 as a cooperative effort by seven Jerusalem families who pooled their funds to purchase the land and build homes. Lots were cast and Yosef Rivlin won the right to build the first house in the neighborhood.[1] In 1873, milk cows were imported from Amsterdam and a dairy was opened in Nahalat Shiv'a. A carriage service to Jaffa Gate was inaugurated that summer.[2]

On October 9, 1994, Hamas carried out a shooting spree in Nahalat Shiv'a, using two Palestinian Authority policemen defectors.[3] Two people were killed and 16 wounded. Ma'ayan Levy, 19, and Samir Mugrabi, 35, were killed in the attack.[4]