Gargano is a historical and geographical Italian sub-region situated in Apulia, consisting of a wide isolated mountain massif made of highland and several peaks and forming the backbone of the Gargano Promontory projecting into the Adriatic Sea. The high point is Monte Calvo at 1,065 m (3,494 ft). Most of the upland area, about 1,200 km2 (460 sq mi), is part of the Gargano National park, founded in 1991. It is within the Italian Province of Foggia.

The Gargano peninsula is partly covered by the remains of an ancient forest, Foresta Umbra, the only remaining part in Italy of the ancient oak and beech forest that once covered much of Central Europe as well as the Apennine deciduous montane forests biome. Horace spoke of the oaks of Garganus in Ode II, ix.

‎The coast of Gargano is rich in beaches and tourist facilities. Vieste, Peschici and Mattinata are world-wide-famous seaside resort locations. The two major salt lakes of Lesina and Varano are located in the northern part of the peninsula. Monte Gargano is the site of the oldest shrine in Western Europe dedicated to the archangel Michael, Monte Sant'Angelo sul Gargano. Today tourism is thriving with several hotels and campsites, in particular along the seaside of Marina of Lesina, give the possibility of staying in this suggestive area. Tourist attractions include the cathedral, the episcopal palace, the Abbey of Santa Maria of Ripalta and the volcanic rocks dating back to the Triassic era, known as "Black Stones", as well as the Sanctuary of San Nazario.

The National Park of Gargano is one of the few national protected areas efficiently contributing to the "un Bosco per Kyoto" enterprise, which in 2007 has involved several schools in the realization of projects for a social and responsible tourism. It is one of the most appreciated areas, unique for the decrease of fires and for the politics of environmental awareness. 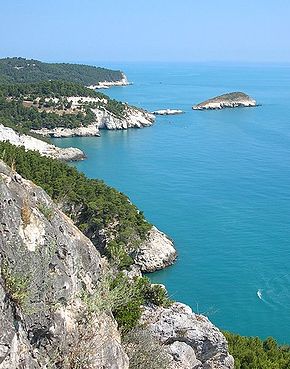 The coast around Mattinata 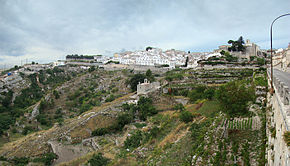 Monte Sant'Angelo on the slopes of Monte Gargano

Some 12 to 4 mya (million years ago) during the Late Miocene to Early Pliocene, a highly endemic vertebrate fauna evolved on what was then Gargano Island due to higher sea levels than today. Several of these animals were subject to island gigantism.

The fossils are found in partially infilled paleokarst fissures across Monte Gargano. The Gargano Island fauna is known as Mikrotia fauna after an endemic rodent genus of the area. Initially named Microtia, this had to be corrected, because the genus name Microtia was already used for butterflies.

The surface features of the ancient karst developed in Mesozoic limestone. In these, sediment accumulated together with the remains of the local fauna, forming thick layers of reddish, massive or crudely stratified silty-sandy clays, known as terrae rossae ("red soils"). Through the mid-Pliocene, some of these deposits were flooded, probably due to tectonic movement of the Apulian Plate. Others were overlaid by other sediments of terrestrial or freshwater origin. In this way a buried, partially reworked paleokarst originated.

Later, as the ice ages cycle got underway, sea levels sank and the former island was continentalized. In the cool and semiarid conditions of the Early Pleistocene (some 1.8 - 0.8 mya) a second karstic cycle occurred, producing the neokarst which removed part of the paleokarst fill.