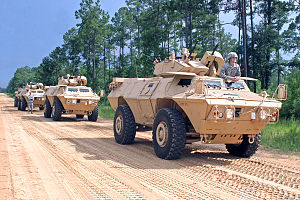 Security vehicles are typically armed with a turreted heavy machine gun and auxiliary medium machine gun. The vehicle is designed to minimize firepower dead space and the vehicles weapons can be depressed to a maximum of 12°. Non-lethal water cannons and tear gas canons can provide suppressive fire in lieu of unnecessary deadly fire.[1]

The vehicle must be protected against weapons typical of riots. Protection from incendiary devices is achieved though coverage of the air intake and exhaust ports as well as a strong locking mechanism on the fuel opening. Turret and door locks prevent access to the interior of the vehicle by rioters. Vision blocks, ballistic glass and window shutters and outside surveillance cameras allow protected observation from within the vehicle.

Wheeled 4x4 and 6x6 configurations are typical of security vehicles. Tracked security vehicles are often cumbersome and leave negative political connotations for being perceived as an imperial invading force.

Paramount Group, South Africa’s largest independent defence and aerospace business, designs and manufactures the Maverick, an internal security vehicle used by peacekeeping forces in hostile environments around the world.[2] The Maverick was launched in 2008 during the Africa Aerospace and Defence Exhibition (AAD), which took place at the Ysterplaat Air Force Base in Cape Town, South Africa.[3]

The Maverick has a combat weight of 15,000 kg and is fitted with either a militarised MAN engine and a 12-Speed Semi-Automatic, or with a diesel power plant with a 6-speed fully automatic transmission. [4] The vehicles hull structure is specifically designed to protect the crew from Dragunov projectiles, .50 calibre kinetic energy projectiles and attacks from improvised explosive device (IEDs).[5] The large internal space inside the Maverick provides space for the crew and various types of military equipment including anti-riot gear, surveillance equipment, water cannons, ramps for SWAT Teams, and bomb disposal robots.[6]