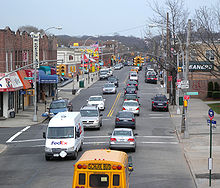 Metropolitan Avenue is a major east-west street in Queens and northern Brooklyn. Its western end is at the East River in Williamsburg, Brooklyn, and the eastern end at Jamaica Avenue in Jamaica, Queens.