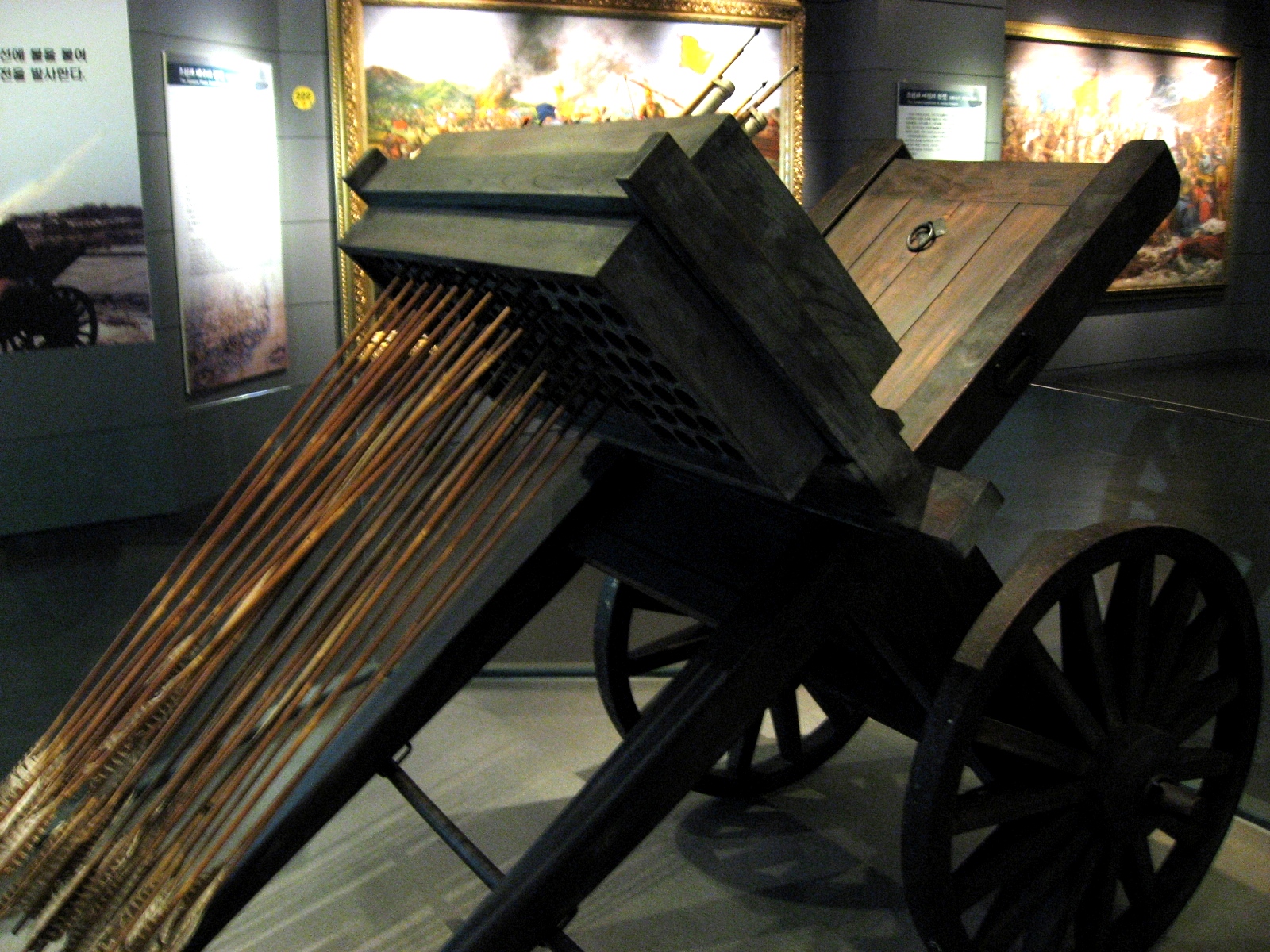 Hwacha or Hwach'a .ref|Firaxis1 was an weapon developed and used in , inspired by Chinese s and the cylindrical and box shaped launch platforms that fired them. Hwacha were first developed in the 1400s by Korean scientists. It is a two-wheeled carrying a launch pad or board, filled with holes into which the ammunition is inserted. These small rockets are attached to "Gungdo bow-arrows", which shoot about 100 to 200 iron spikes at one time upon detonation.Fact|date=April 2008 During combat, the projectiles are attached to the arrows, ignited and fired. This was transported on s [cite book | last=Charney | first=Michael | authorlink=Michael Charney | year=2001 | title=Southeast Asian Warfare, 1300-1900| edition=1st ed. | publisher=Brill Academic Publishers, Incorporated | id=ISBN 90-04-14240-1] . Many East Asian historians believe this technological breakthrough alongside the in the mid-16th century had a distinctive effect during the [cite book| first = Lee| last = Ki-Baik| authorlink = Ki-Baik Lee| coauthors = Edward J. Schultz| year = 2005| month = September| title = New History of Korea| edition = 2nd Edition| pages = 518| publisher = Harvard University Press| location = US| id = ISBN 0-674-61576-X] . Today, hwacha appear in Korean museums, national parks, and popular culture.

Long before the development of the hwacha, imposed severe restrictions on exporting to Korea, keeping the secret of gunpowder to themselves. Yet, gunpowder weapons were key to the Koreans in maintaining a predominant navy in the (East Sea) to protect Korean fishermen and merchants against the increasing numbers of Japanese pirates.

Therefore, there was an effort by Koreans to develop gunpowder on their own. Between the years of to [cite web | author=Seoul National University-College of Humanities-Department of History| title=History of Science in Korea| publisher=Seoul National University | date= | work=Vestige of Scientifical work in Korea| url=http://seer.snu.ac.kr/trip/anc-4.html | accessdate=2006-07-27] , Korea began its first productions of gunpowder. In , , a Korean scholar, discovered a way to obtain gunpowder by extracting from the and subsequently made Juhwa, Korea's very first rocket [cite web | author=Korean Broadcasting System-News department| title=Science in Korea| publisher=Korean Broadcasting System | date= | work=Countdown Begins for Launch of South Korea’s Space Rocket| url=http://seer.snu.ac.kr/trip/anc-4.html | accessdate=2006-07-27] . Further developments led to the birth of the family of s.

During the rule of , hwachas were further developed and extensively made. Records shows that during this time 90 hwachas were in use. King Sejong, famous for his contribution to , made efforts to improve the hwacha and by the end of his rule, a single hwacha could fire 200 rocket arrows at one time.

Stronger and more effective hwachas were made in under the decree of King Munjongref|hwacha3. At the time, 50 units were deployed in (present-day Seoul), and another 80 on the northern border. By the end of , hundreds of hwachas were deployed throughout the peninsularef|hwacha4.

Hwachas saw action most extensively during the Japanese invasions of Korea against the ese soldiers. They were mostly placed in or s ref|iw and used in defensive manners. These proved to be powerful in many battles, and were most prominent in the , in which 3,400 Koreans repulsed 30,000 Japanese with the help of 40 hwachas.

Hwachas were also used in s under the navy of Admiral to attack Japanese ships from a distance.

The Japanese ground troops, especially in the Battle of Haengju, typically advanced in dense formations, presenting ideal targets for the hwacha. ref|iw2

The hwacha's structure was very similar to a hand cart with a mobile wooden launchpad on the top filled with 100 to 200 cylindrical holes, into which the ignitors like (사전총통) were placed ref|component1.

The ammunition, like the , a Korean variation of the Chinese , was comprised of an arrow with an iron head and a section with a paper gunpowder pouch attached to it. Approximately 100 projectiles were loaded and launched in one volleyref|component2, and were effective up to a range of 100 meters.

The back side of the hwacha featured two parallel arms that allowed the operator push and pull the machine, and a vertical designed for in line attacks or stand ground- positions.ref|desc1 The wagon-like wheels were usually fastened by wood pivots and iron s; in order to reduce friction oil was used.ref|desc2

The Korean army carried siege engineers and s in order to make repairs to the Hwacha if poor road conditions, bad weather or battle damaged the machinery.ref|desc3

Unlike s or mortars used in Western warfare during the 16th century and the Middle Ages, which required heavy iron balls, Hwacha fired arrows which were thin and light, making it an easy-to-maneuver siege weapon.ref|projectile

The holes in the top of the launching pad in Hwacha ranged in diameter from an inch to an inch and a half, which allowed thin Gungdo bow-like arrows to be fired and also admit Sajunchongtong class to be placed in the back side of the shooting board.ref|projectile2

-class projectiles were designed by Korean siege engineers specifically to be used in Hwacha. They were small arrows usually shot in multiples of 200. Called "(so)" (소) they possessed a pouch of attached in the bottom near to the section.ref|projectile3 Besides the singijeon-class projectiles, hwacha could also fire 100 steel-tipped rockets. [Turnbull, Stephen, Samurai Invasion, Sterling, p.149]

Because of the large numbers of arrows fired from Hwachas and the wide spread damage of its attack, a dense formation presented an ideal target for Hwachas.

The of the "so"-class"(소) Singijeon projectiles was fairly flat and – like other spinning projectiles – experienced the . Operators used to fire the weapon with an angle nearly 45 degrees to maximise range. Adverse conditions (wind, humidity, rain) during a battle generally limited their striking distance to about 100 meters.

Hwachas' range could be extended if the siege weapon was situated in elevated places like s. Singijeon arrows from that position had a range of about 150 meters. ref|ballistics2

A 15th century account from the Annals of Joseon Dynasty tells us of an experiment, in which the Singijeon fired from the Hwacha completely pierced a scarecrow armed with a suit of armour and shield, at the range of 80 paces(About 100 meters).

Hwachas were mostly used in defensive manners, however some Western and East Asian historians have recently concluded that in some cases they had been used offensively in sea to surface attacks and in as well, particularly in the , during the in 1598. ref|usg1

Hwachas were usually carried to battle highly escorted. Once the army settled down in es or base camps, the operators would disassemble the siege weapon by placing the launching pad on the top. Transporting Hwachas were similar to European s and required assembling before usage. All the pieces featured similar characteristics like lego bricks and the mobile launching pad could be unpacked and easily placed on the wood outlet on the top of cart.ref|usg2

Once a hwacha was set up for combat, the operators would use the gunpowder stored on a boot-like bag tied on each ignitor to be used for each hole on the machine. After that, the operators were able to load the Hwacha with arrows or iron s and be ready for shooting. To do so, the operators stepped back and covered their ears, pulling the ropes that contained each ignitor thus blasting fire on its opponent.ref|usg3

At sea, maneuvers were slightly different and complex because the operator would need to find a proper and stable place to fire. Usually some Hwacha operators preferred to be in the rowers deck where they were able to shoot from the windows, while others preferred to be in the main deck so they could shoot to the s of the enemy ships. This kind of maneuvers was particularly seen in Korean warships.ref|usg4

, the first expansion pack for the award-winning strategy computer game , features Hwacha as the special military unit for Korean civilization. In this game, the hwacha replaces the as an artillery unit in the middle ages for Koreans and has 150% the bombardment strength of conventional cannons as well as lethal bombardment ability unlike most of other siege weapon units.ref|Firaxis2

In and , Hwacha replaces catapult unit, which has a strength of 5 and has bonus of 50% strength against melee units.

In , players using the Korean civilization can build units, which are based on the Hwacha.

In , the Hwacha is a unique unit that can only be built by the Koreans.