The act calls for the creation of a universal single-payer health care system in the United States, the rough equivalent of Canada's Medicare, the United Kingdom's National Health Service, and Taiwan's Bureau of National Health Insurance, among other examples. Under the policies this Act would enact, all medically-necessary medical care decided between doctor and patient would be paid for automatically and directly by the Government of the United States, ending the need for private insurance for such care, and probably recasting private insurance companies as purely supplemental coverage, to be used when non-essential care is sought, as often happens in the United Kingdom for things like dentistry services.

The national system would be paid for through taxes, and these monies, which replace insurance premiums and, with them, the main core justification for private insurances to begin with. Advocates of this "single-payer health care", such as economist Paul Krugman, have argued that by eliminating insurance companies as they exist now, and thus also their administrative overhead, overall health care costs would be reduced sufficiently to cover the presently uninsured—and everyone else—with ease and possibly even ultimately a monetary surplus.[1]

The bill was first introduced in 2003,[2] when it had 25 cosponsors, and has been reintroduced in each Congress since. However, it has always failed, including in its latest (unofficial) push by activists during the 2009 health care debates over the bill that became the Patient Protection and Affordable Care Act. H.R. 676 was expected to be debated and voted upon by the House in September 2009,[3] but was never debated.[4] Advocates who remained staunchly for single-payer health care as the ultimate vote and passage of the America's Affordable Health Choices Act of 2009 loomed, tried in vain to present HR 676 as a viable alternative to the Affordable Health Care for America Act, H.R. 3962, but were ignored, and even in some cases arrested by police during various nationwide debate events, with the implicit approval of Max Baucus, who acted as head of these debates.

Currently, advocacy of HR 676 has once again faded to the sidelines, and even many of its most intense advocates seem to have accepted that single-payer health care is now once again a long-term project that is years, perhaps decades, away from realisation. Some in the movement have presently proposed a shift in emphasis away from an effort at a national law and more efforts towards enactments of single-payer systems within individual U.S. states, the idea being that state-level single-payer would serve as living models for the arguments for federal coverage.

Elements of the bill

The summary of the National Health Care Act includes the following elements, among others:[5]

Cost analysis of the bill 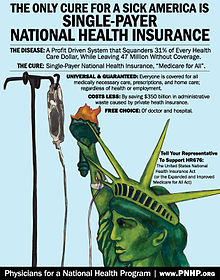 An analysis of the bill by Physicians for a National Health Program who estimated the savings at $350 billion per year in 2008.[6] Others have estimated a 40% savings[7] due to elimination of insurance company overhead costs.[8]

The Congressional Budget Office has yet to "score" or evaluate the bill as of August 2009.[citation needed] Paying for the 55% of medical costs not already covered by government programs would shift significant costs from insurance companies to the government, but this cost would be offset by tax revenues to the extent determined by Congress, as insurance premiums now paid to insurance companies would be replaced by taxes paid to the government. The immediate savings realized would be from the removal of insurance company overhead and hospital billing costs having to do with those private insurances. Paul Krugman described this savings as follows in 2005:[9]

The great advantage of universal, government-provided health insurance is lower costs. Canada's government-run insurance system has much less bureaucracy and much lower administrative costs than our largely private system. Medicare has much lower administrative costs than private insurance. The reason is that single-payer systems do not devote large resources to screening out high-risk clients or charging them higher fees. The savings from a single-payer system would probably exceed $200 billion a year, far more than the cost of covering all of those now uninsured.

Applying Krugman's $200 billion savings estimate to the U.S. population of approximately 300 million people representing 100 million households,[10] this amounts to approximately $650 per person or $2,000 per household. A study by Harvard University and the Canadian Institute for Health Information estimated the 1999 costs of U.S. health care administration at nearly $300 billion, accounting for 30.1% of health care expenses, versus 16.7% in Canada. This study estimated the U.S. per-person administrative cost at $1,059.[11] One organization that advocates nationalized health care estimated this savings could be as high as $350 billion per year in "...overhead, underwriting, billing, sales and marketing departments as well as huge profits and exorbitant executive pay."[12]

The incremental cost of covering the 46 million uninsured was not scored for this bill. However, a similar cost was estimated by the CBO at approximately $100 billion per year for the America's Affordable Health Choices Act of 2009.[13] This would partially offset the savings indicated above.

H.R. 676, though introduced in 2003, initially received little attention; with the June 2007 release of the Michael Moore documentary Sicko, which focuses on the status of health care in the only developed country without universal health care, interest in the Act was renewed.[14][15] The DVD edition of the film includes a segment (Sicko Goes To Washington) promoting the bill.[16][17][18]

In 2009 the bill was reintroduced and renamed from the United States National Health Insurance Act to the United States National Care Act, a reflection of the fact that the bill provides health care instead of providing health insurance. Health care was a major part of Barack Obama's campaign promises, and while he admitted that only a single payer system would provide universal coverage, the plan favored by Obama would be to increase insurance coverage instead. However, town hall remarks by Obama have indeed included support for a single payer system, particularly during his 2003-era pronouncements.[19]

In 2007, about 46 million Americans were without health insurance, but increasing insurance would still not provide coverage for the approximately one third of those who actually qualify for Medicare and Medicaid but are unable or unwilling to apply.[20]

The bill proposes an expansion of the Medicare program to the non-elderly to provide universal coverage and allows individuals to select their own doctors. The bill would create a single-payer system, with Medicare replacing the 1,300 private insurance companies currently involved, which would reduce net costs between $100 and $250 billion annually, based on estimates. The savings relates to the approximately one-third of health care expenses that are spent on administrative overhead rather than medical service delivery. Also, rather than covering 80% of medical costs with the remaining 20% to be paid either out-of-pocket by the patient or via a privately-underwritten "supplemental" insurance plan, as Medicare is structured now, HR 676 would cover 100% of all expenses. One of the alternative names for HR 676 among activists is "Medicare for All", but this is not quite fully accurate, given that if "Medicare for All" were all that really comprised HR 676, then the universal coverage would still need to pay the remaining 20%. Under HR 676 no one will need to do this. Activists claim they use "Medicare for All" as a slogan to increase ease of understanding of what single-payer is among the general U.S. populace, who, they contend, might not understand the scheme as well if a "full" explanation were given from the outset.

H.R. 676 does represent a significant expansion of government in health care, and is in fact the one example among health care plan options in the United States that would objectively qualify as a "government takeover" of health care. This is one of the primary arguments that opponents of the bill use when they come out against it. However, advocates do not see the prospect of a "government takeover of health care" as pejorative the way some others in the country do; they claim it is no different than "government-run" parks and recreation facilities, "government-run" police departments or "government-run" fire departments. Under HR 676 the government would be essentially replacing the foremost part of the private health insurance industry.[21] Conservatives historically have argued against the expansion of government programs, offering significant resistance to the current and prior health care reform efforts,[22] and the bill would raise taxes for higher-income individuals.[21] On July 30, 2009, Rep. Anthony Weiner offered Republicans an opportunity to oppose government-run health care programs by putting forth an amendment[23] that would eliminate Medicare.[24] Every single Republican representative (and every Democrat) on the House Energy and Commerce committee voted to continue Medicare.[25]

According to the liberal media criticism organization Fairness and Accuracy in Reporting, a 1987 New York Times/CBS poll showed 78% of people saying that the "government should guarantee medical care to everyone."[26] Between 2003 to 2009, 17 opinion polls showed a majority of the public supports various levels of government involvement in health care in the United States.[27] Many polls, such as ones administered through CNN,[28] AP-Yahoo,[29][30] New York Times/CBS News Poll,[31][32] and Washington Post/ABC News Poll,[33] Kaiser Family Foundation[34] showed a majority in favor of a form of national health insurance, often compared to Medicare. The Civil Society Institute[35] and Physicians for a National Health Program[36] have both found majorities in favor of the government offering guaranteed insurance, and a Quinnipiac poll in three states in 2008 found majority support for the government ensuring "that everyone in the United States has adequate health-care" among likely Democratic primary voters.[37]

In contrast, a January 2010 Rasmussen Reports poll of registered voters showed only 34% of respondents in favor of single-payer health care, with a majority (52%) opposed.[38] Politifact rated a statement by Michael Moore "false" when he stated that "[t]he majority actually want single-payer health care."[39] Responses on these polls largely depend on the wording. For example, people respond more favorably when they are asked if they want a system "like Medicare," less favorably when stated as "socialized."[40]

Since the act covers all "residents," a section was added requiring the Secretary of HHS to create a rule addressing the possibility of medical tourism (Section 101(e))[citation needed].