El Matareya is a region (markaz) in Egypt. Located in the Dakahlia Governorate, it lies on the Lake Manzala coast in the northeastern part of the country.

The region should not be confused with the district of Mataria in Cairo. El Matareya has a population of around 300,000 inhabitants, and consists of two main districts: Al-Ghasna and El-Obeyeen. It was announced as a separate city in the 1930s, with many villages following in it.

The city consisted of two main islands named Al-Ghasna and El-Obeyeen. They were distinct islands until 1903 when the government issued a decree to unite both islands under the name Matareya city. Transportation between the two islands was via wooden boats until the waterway separating the islands was dried up. The first brick houses in the city were built in the 1750s with the roofs being made of wood.

The city played a heroic role during the French campaign on Egypt, where the fishermen joined the resistance forces led by the Egyptian leader of the struggle against colonialism in this region, Sheikh Hassan Tobar. When the French battleships moved from Damietta towards Matareya to attack, they were surprised by 100 fishermen boats opposing them. At last, the city was occupied by the French in October 1798.

The fishermen of Matareya played an important role in the digging of the Suez Canal, since they delivered water from the city to the workers in Port Said. 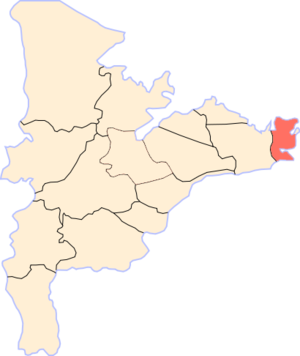 The city was destroyed by a devastating fire in 1907. Many people died in the fire and all what was left of the city was ash and remains of dead animals. Al-Ahram newspaper published in its issue dated June 26, 1997, a detailed study on the burning of the city by Dr. Younan Labib Rizk. Khedive Abbas II visited the city upon the fire and ordered reconstruction of its mosques. He also gave a certain amount of money to the people of the city for reconstruction. Also many other steps where taken to help the people construct their city and money was given to all those who suffered losses.

Matareya has followed Dikirnis until 1929 and then followed Manzala until it was announced a city itself and a Centre (markaz) with many villages following it. The streets of the city were very impressive and surprising for visitors since they have been designed and organized perfectly and are almost unique in the world. It was arranged like a chess table that if you stood at the beginning of a street you can see its end without any hindrance, and it is still this way until now.

In 1942, People's Artist Zakaril Hijawi hosted Anwar El Sadat in Matareya (which was Hijawi's hometown). Sadat worked on the car that moved from Matareya to the Suez Canal, delivering arms to guerrillas and men of the revolution. Years later when Sadat became president, he came back to the city to lay the foundation stone for Al-Salam Canal and visited the house he lived in during his stay in the city which was Ramshackle at that time.

Role in the Tripartite Aggression

The city was the second line of defense after the Suez Canal during the Tripartite Aggression against Port Said on October 26, 1956. The city was burning by aerial bombardments by the intense aggression. Thousands of boats and fishing boats transported every second hundreds of the wounded and injured to be resuscitated in Matareya. Also the people of Matareya welcomed all immigrants from Port Said and other cities along the Suez Canal.

Role in the War of Attrition

The city had an important role in the War of Attrition. Many fishermen volunteered to join the Coastguard to be trained on using weapons and defending their points. These exercises came to fruition, where some fishermen caught an Israeli pilot after they forced him to jump off his plane when they shoot at it. Many other achievements were credited to the people of the city in this war.

At 12 noon on November 27, 1979 the helicopter landed in Matareya carrying the President and his comrades. The late president visited the city to lay the foundation stone for Al-Salam Canal. The city was decorated like never before for that historical day.

Famous Families of the City

and some many others.