The Mark 8 Landing Craft Tank (also referred to as the LCT (8) or LCT Mark VIII) were landing craft tank ships operated by the British Armed Forces. The vessels were based on an American design, but improved into ocean-going vessels capable of transiting to and operating in the Far East.

Although 186 vessels were ordered, the end of the Second World War meant that only 31 were completed for service in the Royal Navy. 12 were later transferred to the British Army; these were initially operated by the Royal Army Service Corps, then by the Royal Corps of Transport. Between 1958 and 1966, the other 19 ships in the class were transferred out to foreign navies or civilian companies, converted for other uses, or otherwise disposed of.

During their service life, vessels of the class operated during the Suez Crisis and Indonesian Confrontation, and were involved in the setup and supply of guided weapons bases in the Hebrides as part of Operation Hardrock.

The design of the LCT Mark 8 was derived from the 1943 American LCT Mark 7 (eventually re-categorised as Landing Ship Medium).[1] This was the United States' first large landing craft, and had the capacity to transport three to five tanks at a speed of 12 knots (22 km/h).[1] Although not ideal for Britain's needs, designers used the basic concept as a model for the Mark 8, which would be Britain's final LCT.[1] The LCT was intended for duties in the Far East theatres of the Second World War, and unlike previous vessels, was designed to be ocean-going—capable of transiting between Europe and Asia.[2] 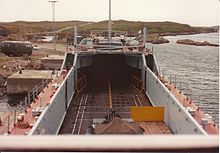 The tank deck of HMAV Abbeville.

186 Mark 8 LCTs were ordered, with the pennant numbers 4001 to 4187 allocated.[4] However, the war's end led to most of these vessels being cancelled and scrapped or sold directly into civilian service.[2] Only 31 entered service with the Royal Navy.

LCT (8)s operated by the Navy were either named after features of castle architecture or remained unnamed during their naval service life.[citation needed]

The Suez Crisis highlighted the Army's need to train landing craft crews to respond to similar emergencies.[8] Beginning in 1957, twelve LCT (8)s were transferred to the Army and stationed at Portsmouth: seven entered Army service between January and March of that year, while the other five followed later.[5] The vessels were given names of Second World War battles, and were crewed by men of 76 Company, Royal Army Service Corps (RASC).[5] The RASC Water Transport Training Unit, based at Fort Victoria on the Isle of Wight began running LCT training courses and supplied the vessels with crews (men on their National Service) until the unit closed in 1962.[8]

In 1957, several of the LCTs took part in Operation Hardrock, the establishment of a guided weapons range in the Hebrides.[9] The vessels made exploratory voyages and subsequently delivered men and equipment to islands like St Kilda, South Ford, and Lochboisdale.[10] In the following years, they made supply runs from their base at Cairnryan to the islands.[11] Landings were dangerous, due to weather and beach conditions, and on one occasion, Abbeville became grounded at Village Bay in St Kilda for three days.[11]

In 1960, three of the LCTs (Ardennes, Agedabia and Arromanches) were transferred to Singapore.[12] Whilst in service there they carried out routine transport and ammunition dumping activities, and were deployed in the Indonesian Confrontation in 1962. Two more LCTs (Antwerp and Arakan) were despatched to the region the following year.[13]

When the LCTs first entered service with the British Army they were designated as Royal Army Service Corps Vessels (RASCV). In 1965, the RASC was amalgamated with the transportation arm of the Corps of Royal Engineers to form the Royal Corps of Transport.[14] The following year, a Royal Warrant dictated that all RCT vessels were to be titled Her Majesty's Army Vessels (HMAV).[15][n 1]

Other forces and civilian service

During the late 1950s, Jawada was loaned to the Qatar Petroleum Company.[16] The landing craft was briefly recommissioned during late 1956 and early 1957 to serve as a tender to the cruiser HMS Superb, which was visiting Bahrain for amphibious warfare exercises.[16]

Buttress was sold to the French Navy in July 1965; she was redesignated L 9061.[3] Counterguard was sold to the Royal Malaysian Navy in 1965 and renamed Sri Langkawi.[3] The vessel operated under this name until February 1968, when she was disposed of.[17]