The Douglas Hyde Gallery is a publicly-funded contemporary art gallery situated within the historical setting of Trinity College, Dublin, Ireland.[1]

When the Gallery opened in 1978, it was for a number of years Ireland's only public gallery of contemporary art. Today, in an abundance of smaller galleries and exhibition spaces in Dublin, The Douglas Hyde Gallery continues to sustain its reputation for holding exhibitions by some of the most established and well-regarded Irish and international artists working today.

The Douglas Hyde Gallery consists of two exhibition spaces that are used to show concurrent exhibitions, which often have a relating theme or tone.

Installation photograph of 'Fotografias' by Fischli/Weiss in Gallery 1, The Douglas Hyde Gallery, March 2009 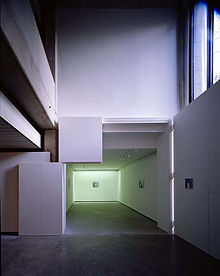 Installation photograph of 'The Paradise [4]' by Marlene Dumas in Gallery 2, The Douglas Hyde Gallery, December 2001

Gallery 2, which opened in 2001, was designed by McCullough Mulvin Architects. In addition to exhibitions by contemporary artists, this space is often used to show small collections of ethnographic objects and artefacts which are generally marginalised by larger museums and galleries. The most popular of these exhibitions have included: Nepalese Shamanic objects,[2] Japanese Tea Bowls [3] and Ghanaian Asafo Fante Flags.[4] 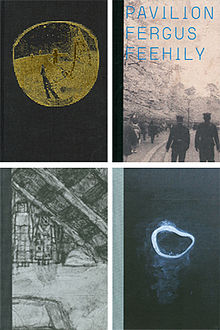 The Douglas Hyde Gallery produces publications for many of its exhibitions. These books can take the form of exhibition catalogues, artists’ books or curated projects and, while extremely different in content, they all share a similar exterior presentation. Since 2002, the Gallery has published over forty books in this small, hardback format.

The Leaves & Papers series of books and leaflets is an ongoing project which allows The Douglas Hyde Gallery to produce and publish ideas, images and texts relating to a specific theme or concept which does not always relate directly the Gallery’s programme.

Another ongoing series of books documents the Galley’s programme while also highlighting some of the central principles of the Gallery and its exhibitions. The books explore ideas about visual culture, identity, and spirituality through carefully selected texts and imagery. These books include: the bread and butter stone, 1997; Patmos, 1999; 33 Happy Moments, 2003; Alabama Chrome, 2007; The Bridge, 2008; Questions of Travel, 2009; Saunter, 2010.

The Douglas Hyde Gallery has become increasingly well-known for its programme of musical events. In recent years, Cat Power, Sufjan Stevens and Laura Veirs have all played in the Gallery. Sometimes the musical performances relate directly to exhibitions: In 2008, Jandek performed a concert to coincide with an exhibition of his album covers and in 2009, Jim White played a gig to celebrate the opening of his exhibition of ephemera from the American South. It is more often the case that the performances and exhibitions share a mood or atmosphere rather than a direct connection.