The University Philosophical Society, commonly known as The Phil, is a student paper-reading and debating society in Trinity College, Dublin, Ireland. It is one of the two debating societies in the university. The Phil claims to trace its history back as far as 1683, and claims to be both the oldest student society and the oldest paper-reading society in the world. This is disputed by the College Historical Society. The society meets every Thursday during term in the Graduates Memorial Building to discuss a paper, debate a motion or hear an address.

The Graduates' Memorial Building, home of the Phil.

The Phil's rooms are currently situated in the Graduates' Memorial Building (commonly known as the GMB) in Trinity College, which it has shared with the College Historical Society (the Hist) since its construction in 1904. It holds most of its meetings in the GMB's Debating Chamber; meetings with an expected audience above two hundred are held in larger lecture theatres in the college itself.

Like most other Irish collegiate debating societies, the University Philosophical Society is traditionally a paper-reading society, with a meeting consisting of responses to a paper rather than debate on a motion. Unlike those other societies, the Phil still keeps this tradition alive, though it now also organises debates. Each year the writer of the best paper and the best chamber speaker are awarded with medals from the society. In addition to debate, the Phil provides facilities for its members such as games and a conversation room, and organises club nights, sporting events, blood drives, and other social events.

The Dublin Philosophical Society was founded in 1683 by William Molyneux. It was intended to be the equivalent of the Royal Society in London, with which it maintained cultural ties. Among its most prominent members were William Petty, Archbishop Narcissus Marsh, Archbishop William King and Bishop George Berkeley. Most of its members were graduates of Trinity College, Dublin, and a number of them were Fellows of the College, but it had closer ties with the Royal College of Physicians of Ireland. It existed for three periods: 1683-1687, 1692-1698 and 1707-1708. Although it in itself played a small role in intellectual Dublin life, it inspired the foundation of the Dublin Society founded in 1731, which became the Royal Dublin Society in 1820. Molyneux's brother, Thomas Molyneux, was one of the founding members of the Dublin Society. The Phil harkens back to this older society as its progenitor, attributing its founding date as 1683 and recognizing William Molyneux as its first president.

Bram Stoker, author and early President of the Society, who presented "Sensationalism in Fiction and Society" as his first paper.

The society served from its beginning as a popular arena of discussion and a training-ground for future notable Irishmen. Among the notable events held in its early years was the demonstration of an early telephone by Stephen Yeates in 1865. Presidents in the early years included students who would become classicist and Provost of the College John Pentland Mahaffy, poet Edward Dowden and Dracula author Bram Stoker. The Society housed the Bram Stoker archive until the foundation of the Bram Stoker Society in the 1980s.

The Phil suffered with the rest of Trinity College during the First and Second World Wars, though one notable President of the early 1940s was lawyer, Nigerian and Ugandan independence hero and Supreme Court Chief Justice Udo Udoma. The society admitted women in 1968 (after the resignation of the conservative President and Secretary), becoming the first mixed-sex debating society in Trinity College. A merger with the female-only University Elizabethan Society soon followed; this was a spur towards both increased female membership and increased debating in the Phil. As a symbolic gesture, the highest ranking female officer of the Phil is accorded the honorary title of President of the Elizabethan Society. Recent years saw the presidency of Niall Lenihan, son of then-Tánaiste Brian Lenihan, remembered as a defender of the Phil's rights of association and free speech[who?] during the visit of discredited historian David Irving.

Recently, the Phil's meetings have been divided between policy-driven paper readings, showpiece debates and interviews with luminaries like Al Pacino, Desmond Tutu, John McCain and Stephen Fry with the result that the Phil is now a noted source of contributors to the Irish media, whether they be its pool of guests or its organising Council.

During its long history, the Society has recorded the presence of many notable guests, the most distinguished of whom are named honorary patrons of the society. Included amongst these are multiple Nobel Prize laureates, both before and after their receipt of the Prize, such as William Butler Yeats, Heads of State and of Government, notable actors and musicians, as well as well-known intellectuals. Guests have also included all Irish Taoisigh since Charles Haughey.

Mohamed ElBaradei addressed the Society in 2007.

Figures from News Media and Journalism

Figures from the Performing Arts 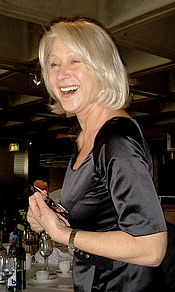 Mirren at The Critics' Circle Awards Luncheon in April 2007. 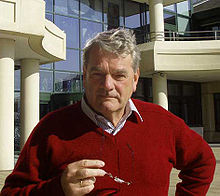 The Phil has been involved in several free speech controversies. Contributors to its debates included Oswald Mosley during his residence in Ireland. In 1988, the Society invited then-Holocaust denier David Irving to speak. A large protest by students, staff, Jewish groups, socialists, and anti-Nazi activists resulted in the meeting being relocated to a hotel conference room and held in the small hours of the morning. The traditional vote of thanks to Mr Irving for his paper was defeated, which is rare in the society's history.

More recently, the invitation to Austrian politician Jörg Haider to address the society in the Graduate Memorial Building (GMB) in late 2002 led to a protest by self-described anti-fascist activists, which continued through the debate, with noise being made outside the chamber and interjections in the society's proceedings within. An invitation to BNP official Tony Wentworth was revoked after threats of physical action by leftist groups.

Another guest to generate controversy was Islamist Anjem Choudary, who hailed the 9/11 terrorists as martyrs. The former Irish Taoiseach John Bruton threatened to withdraw from a Phil debate later that year over this invitation, which was not withdrawn. Mr Bruton is now an Honorary Patron of the Society, and Anjem Choudary has been invited to speak at the Phil's lectern several times.