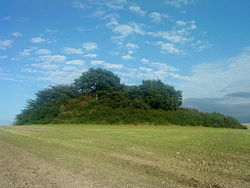 The Dobberworth or Dubberworth is one of the largest prehistoric tumuli (Hügelgrab) in northern Germany, located on the isle of Rügen near Sagard.[1] The Dubberworth is about 15 metres (49 ft) tall,[1] and was made from an estimated 22,000 m3 of earth,[1] making it the largest tumulus of Rügen.[2] Archaeologists were not yet able to date the tumulus precisely, but assume it was used during the Bronze Age.[1] The etymology of the name is also uncertain, "-worth" is linked to an old designation for an "elevated estate" ("Worte", "Wurt").[1]

According to local legends, the Dubberworth was made by a giant who intended to fill a narrow ford linking two nearby Bodden and lost the clay on their way.[1] In one legend, the giant was a female on her way to exact revenge on a prince of Rügen who did not love her back, in another legend it was male giant Scharmak on his way to his girl-friend.[1] A further legend tells about dwarven dwellers and large amounts of gold inside the hill.[1]