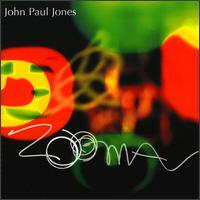 It showcases his acoustic abilities along with his composing abilities. Several tracks contain orchestral arrangements, the most notable being "Snake Eyes."This album illustrates Jones's unique composition style, in which he takes a theme or simple melody, and repeats it and builds on it, often with tension-inducing arrangements.

Zooma contains one organ solo by Jones (on "Snake Eyes"), which also contains orchestra arrangement. He uses his triple-necked guitar often, and also plays a wide assortment of instruments (as well as ).

It is often debated whether this album sounds similar to the music of . While it is generally agreed that "Nosumi Blues" sounds the most "Zeppelin-esque", when posed with the question of whether or not the album sounds Zeppelin-influenced, John Paul Jones replied "Well, wasn't Led Zeppelin John Paul Jones-influenced?"