The de Clare family of Norman lords were associated with the Welsh Marches, Suffolk, Surrey, Kent (especially Tonbridge) and Ireland. They were descended from Richard fitz Gilbert, who accompanied William the Conqueror into England during the Norman conquest of England.

The Clare family descends from Gilbert Crispin, Count of Brionne and Eu, whose father Godfrey was the eldest of the illegitimate sons of Richard I, Duke of Normandy. Gilbert was one of the guardians of William II, who became Duke of Normandy as a child in 1035. When Gilbert was assassinated in 1039 or 1040, his young sons Baldwin de Meules et du Sap and Richard de Bienfaite et d'Orbec fled with their guardians to Baldwin of Flanders; they returned to Normandy when William married Baldwin's daughter in 1053, and William took them into high favour.

After the conquest of England Richard received huge estates including Clare and Tonbridge, the estate whose name was normally coupled with his. According to Richard Mortimer, writing in the Oxford Dictionary of National Biography, he was "the founder of the English, Welsh, and Irish baronial family which historians usually call ‘of Clare’."[1] Historical sources are vague and sometimes contradictory about when the name de Clare came into common usage, but Richard fitz Gilbert (of Tonbridge) is once referred to as Richard of Clare in the Suffolk return of the Domesday Survey.[2] Baldwin de Meules was left in charge of Exeter on its submission (1068) and made sheriff of Devonshire. Large estates in Devonshire and Somersetshire are entered to him in Domesday as "Baldwin of Exeter" or "Baldwin the Sheriff".

On his death, Richard's English estates passed to his son Gilbert Fitz Richard (died 1114/7). Gilbert's eldest son Richard (died ca. 1136) was the ancestor of the earls of Hertford and Gloucester. Gilbert's younger son Gilbert, establishing himself in Wales, acquired the earldom of Pembroke or of Striguil. The elder line obtained (probably from King Stephen)[3] the earldom of Hertford, and were thenceforth known as earls of Hertford or of Clare. John Horace Round in the Encyclopædia Britannica Eleventh Edition suggested that it was probably because "[Gilbert] and the Clares had no interests in Hertfordshire that they were loosely and usually styled the earls of (de) Clare."[3] In the Dictionary of National Biography he stated that investigation showed that the claim that they were "styled earls of Clare" before they were earls of Hertford was not true; they were alternately called Hertford or of Clare.[4] On the other hand, Frank Barlow places Gilbert de Clare as Earl of Hertford in the group of barons given earldoms between 1138 and 1142, and states that they all had "substantial local interests".[5] Ralph Henry Carless Davis states that Gilbert was a witness as Earl of Hertford at Christmas 1141, and it is generally believed that he had been Earl since 1138; but that there is no prospect of clarifying the matter because of the others of the same name. He notes also that "In a military capacity earls figure largely in the capacity of defenders of their counties in the chronicles of Stephen's reign." He therefore argues against the title as a personal dignity at that period.[6] The general scholarly view is now that the title earl of Clare was self-assumed.

In 1217–20 Gilbert de Clare, earl of Hertford or Clare (died 1230), inherited the estates of William Fitz Robert, 2nd Earl of Gloucester (died 1183), including the earldom and honour of Gloucester and the lordship of Glamorgan. Richard de Clare, 2nd Earl of Pembroke (died 1176), known as Strongbow, had no sons and with his death this line came to an end, his many Irish and Welsh possessions passing to his daughter Isabel, who married William Marshal, (c. 1146 – 14 May 1219) who then became known as William Marshal, 1st Earl of Pembroke.[7] 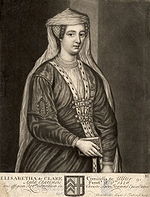 The coat and shield with the three chevrons was probably first used at the end of the 12th century.[8] The stained glass window above is not earlier than Gilbert I (died 1230), the first de Clare lord to be buried in the chancel of Tewkesbury Abbey. The coat of arms can be seen in a modern-day context within the arms of Pontypridd Rugby Football Club.

Origins and family ties with notable members of Clare.