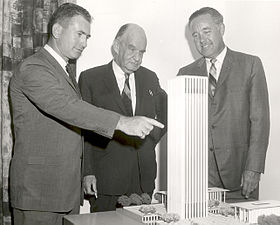 The Electronics Research Center (ERC), was a NASA research facility located in Cambridge, Massachusetts, across the street from MIT at Kendall Square. The ERC opened in September 1964, taking over the administration of contracts, grants, and other NASA business in New England from the antecedent North Eastern Operations Office (created in July 1962), and closed in June 1970. The campus is now the site of the United States Department of Transportation's John A. Volpe National Transportation Systems Center.

It served to develop the space agency's in-house expertise in electronics during the Apollo era. A second key function was to serve as a graduate and post-graduate training center within the framework of a regional government-industry-university alliance. The ERC was just as important a NASA field center as the Langley Research Center or the Marshall Space Flight Center. By fiscal 1968, NASA planned for the ERC to be employing 1,600 professional and technical workers plus another 500 in administrative and support positions (Kelley, n.p.).

The location of the ERC allowed it to take advantage of the close proximity to MIT and (to a lesser extent) Harvard University, MIT Lincoln Laboratory, the U.S. Air Force Cambridge Research Laboratory, and the electronics industry located along Route 128. At the time, the technical, industrial, and commercial aspects of microelectronics were ascendant, especially in the Boston-Cambridge technopolis.

Although no publication to date has investigated the nature of the research or professional training conducted at the ERC, an internal NASA publication lists a few accomplishments identified with the center in passing:

"One particularly interesting development," the source added, "has been in the area of holography. At the Electronics Research Center, holography has been used for data storage, and has permitted a remarkable degree of data compression in the storing of star patterns" ( Preliminary History , 1:V-11, 1:V-34 & 1:V-35). A book on holography written by one of the ERC's directors, Dr. Winston Kock, indicates some of the facility's contributions, such as Lowell Rosen's improvement of so-called focused-image holography (Kock, 80-82).

The Electronics Research Center was at the heart of political controversy from the start. The conception, siting, and shutting down of the ERC is an engaging political tale. President John F. Kennedy and Webb kept the project out of the budget process until after Ted Kennedy's successful first election to the Senate. His campaign slogan had promised that he could "do more for Massachusetts." After the President belatedly put the ERC project in the budget process, Congress rebelled. In addition to Republican members, Representatives from the Midwest and other regions feeling swindled out of the NASA largesse repeatedly fought efforts to fund the ERC. The issue split the Congress along both party and regional lines. [1] As a result, the ERC had the most deliberated and defended existence and siting of any NASA Center.

Although the only Center ever closed, the ERC actually grew while NASA eliminated major programs and cut staff. Between 1967 and 1970, NASA cut permanent civil service workers at all Centers with one exception, the ERC, whose personnel grew annually. Hardest hit by the cuts had been the Marshall Space Flight Center, whose future was then the subject of agency debate (Levine, 134-135).

NASA Administrator James Webb, more than any other individual, shaped the ERC. Webb saw it as fulfilling a broader mission as part of the nation's Cold War struggle on the economic and intellectual battleground of the Space Race. The ERC was an archetype for Webb's regional "university-industry-government complex" analogous to the military-industrial complex, organized because Webb believed that no single institution had the requisite resources to fight this war. The ERC's training of critically needed engineers and scientists served the same Cold War aim (McDougall, 376 & 381).

The ERC has received hardly any attention as a subject of scholarly or lay studies. No single work, neither book nor article, has been devoted to the ERC itself. The few works that consider the ERC other than in passing focus on the turbulent political circumstances surrounding its creation (Murphy, 225-264; Hechler, 219-231). A thesis written for the MIT Sloan School of Management is the only work that deals solely with the facility's closing (Rollins).[2]

From the Washington: Scientific and Technical Information Division, NASA