Cryptanalysis of the Lorenz cipher

Cryptanalysis of the Lorenz cipher 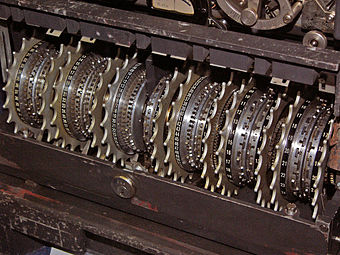 The Lorenz SZ machines had 12 wheels each with a different number of cams (or pins).

Cryptanalysis of the Lorenz cipher was the process that enabled the British to read secret German military messages during World War II. The British Government Code and Cypher School at Bletchley Park decrypted many communications between the German High Command in Berlin and their army commands throughout occupied Europe. These were intercepted non-Morse radio messages that had been enciphered by the Lorenz SZ teletypewriter rotor cipher attachments. British cryptographers referred to encrypted German teleprinter traffic as "Fish". They dubbed this machine and its traffic "Tunny", and the intelligence it yielded as "Ultra".[2]

As with the entirely separate Cryptanalysis of the Enigma, it was German operational shortcomings that allowed the initial diagnosis of the system, and a way into decryption.[3] Unlike Enigma, however, no physical machine reached allied hands until the very end of the war in Europe, long after wholesale decryption had been established.

The message characters were encoded in the 5-bit International Telegraphy Alphabet No. 2 (ITA2). The cipher attachments implemented a type of Vernam stream cipher using a complex array of twelve wheels. The right hand five of these, the chi (χ) wheels, changed the five bits of the incoming character, advancing one position with each one. The left hand five, the psi (ψ) wheels, changed the result of the chi transform further. The central two mu (μ) or "motor" wheels determined whether the psi wheels rotated with a new character.[4]

Initially, operator errors produced a number of pairs of messages sent with the same keys, giving a so-called "depth", which often allowed manual decryption to be achieved. Such depths also allowed the complete logical structure of the machine to be worked out, a quite remarkable cryptanalytical feat on which the subsequent bulk decryption of Tunny messages relied.[5]

Subsequently, decryption was achieved by a combination of manual and automated methods. The effect of the chi component of the key was removed with the use of machines that implemented a statistical technique. The first machine was called "Heath Robinson" and it was followed by several other "Robinsons". These were, however, slow and unreliable, and were superseded by "Colossus" the world's first electronic, (semi-)programmable computer, ten of which were in use by the end of the war.[6] The psi component was then removed using manual methods and machines that imitated the Tunny machine - the so-called "British Tunny" machines.[7]

Electro-mechanical telegraphy was developed in the 1830s and 1840s, well before telephony, and was in widespread use all over the world by the time of the Second World War. An extensive system of cables were used within and between countries, but for mobile German Army Units, radio transmission was often used.

Teleprinters at each end of the circuit consisted of a keyboard and printing mechanism, and very often a five-hole paper tape reading and punching mechanism. When used online, pressing an alphabet key at the transmitting end caused the relevant character to be printed at the receiving end. Commonly, however, the transmitting operator would prepare a message offline by punching it onto paper tape, and then going online only for the transmission of the message recorded on the tape. Typically this would be at some ten characters per second, and so occupy the line or radio channel for a shorter time than for online typing.

The characters of the message were represented by the codes of the International Telegraphy Alphabet No. 2 (ITA2). The transmission medium, either wire or radio, used asynchronous serial communication with each character signaled by a start bit, 5 data bits and 1½ stop bits. Each bit was either a "mark" (hole in paper tape, 1 in binary or x at Bletchley Park) or a "space" (no hole in tape, binary 0 or • at Bletchley Park). For example the letter "H" would be coded as ••x•x.[8]

For its secret transmissions, the German armed services enciphered each character using various online Geheimschreiber (secret writer) machines at both the transmitting and receiving ends. These were the Lorenz SZ (SZ for Schlüsselzusatz, meaning "cipher attachment") machine for the army, the Siemens and Halske T52 for the air force and the Siemens T43 which was little used and never broken by the Allies.[9] Enigma decrypts had revealed that the Germans called the wireless teleprinter transmission systems "Sägefisch" (sawfish), so the name "Fish" was adopted for this traffic.[10] "Tunny" was the name given at Bletchley Park to the first non-Morse link, and it was subsequently used for all traffic enciphered with the Lorenz SZ machines.