The Famous Idaho Potato Bowl (formerly the Humanitarian Bowl) is a post-season NCAA-sanctioned Division I FBS college football bowl game that has been played annually at 33,500-seat Bronco Stadium on the campus of Boise State University in Boise, Idaho, since 1997. The game currently matches a team from the Western Athletic Conference, usually the conference's champion, with one from the Mid-American Conference and is televised nationally on the ESPN family of networks. The MAC replaces the Mountain West Conference after the folding of the Toronto-based International Bowl. Cincinnati defeated Utah State, 35–19, in the inaugural Humanitarian Bowl in 1997. The Northern Illinois Huskies are the current Humanitarian Bowl champions after defeating the Fresno State Bulldogs, 40–17, in 2010.

For its first four years, the Humanitarian Bowl offered an automatic bid to the Big West Conference champion after that conference lost its contract with the Las Vegas Bowl. From 1997 to 1999, the opponent was a team from Conference USA, while in 2000 an at-large was chosen. After the 2000 Humanitarian Bowl, the Big West Conference stopped sponsoring football and the automatic bid instead went to the WAC, where it remains to this day. With Boise State moving to the Mountain West Conference in 2011, the bowl tie-ins may eventually change, but the WAC will send a team for at least the 2011 season.

The game was sponsored by Micron Technology, an Idaho-based manufacturer, from 1999 to 2002 under the name Crucial.com, which sells computer memory upgrades from Micron. The bowl game then briefly had no sponsor for the January 2004 game. In December 2004, the name was changed to the MPC Computers Bowl. MPC Computers was formerly MicronPC, the computer manufacturing division of Micron, but split from Micron and has no affiliation with Micron. In April 2007, it was announced that the bowl will again be called the Humanitarian Bowl.[1] In May 2007, Boise-based Roady's Truck Stops was announced as the new sponsor, thus renaming the game the Roady's Humanitarian Bowl.[2] On May 25, 2010, mobile business application, uDrove became the sponsor of the Humanitarian Bowl, signing a four-year agreement to replace Roady's. uDrove is a small-business solution dedicated to making life easy for the three million-plus professional truckers throughout the U.S.[3] On August 3, 2011 The Idaho Potato Commission signed six-year naming rights deal to sponsor the Bowl[4]

It is the longest running cold weather bowl game currently in operation. The payout is $750,000, but teams are required to provide a corporate sponsor, purchase a minimum number of tickets, and stay at a selected hotel for a minimum stay. Because of this, 7–4 UCLA declined an invitation to the 2001 Humanitarian Bowl.[5]

Beginning in 2008, the Humanitarian Bowl (in conjunction with the Truckload Carriers Association) featured a "Highway Angel", a truck driver who performed a heroic feat to save the life of another motorist. The 2008 Highway Angel, Leonard T. "Lenny" Roach, pulled a driver from a water-filled ditch near South Bend, Indiana, even though the wind chill factor was −20 °F (−29 °C).[6] The 2009 Highway Angel, Michael Hunt, used his truck to push away a vehicle (and its driver) from a fiery collision near Spring Lake, North Carolina which had already claimed the life of the other driver.[7] The 2010 Highway Angel, Shawn L. Hubbard was honored on December 18, 2010.[8] While driving his truck near Diamond Bar, California, Hubbard came upon a fiery car crash in which the driver was deceased, but the passenger was still alive and trapped in the burning car. Hubbard freed the passenger and pulled him from the vehicle just moments before it was completely engulfed in flames.[9] 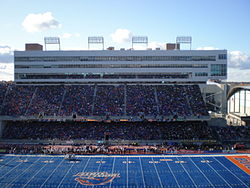