Craig Schley (born September 23, 1963) is a Political Strategist, Radio Commentator on current political and legal affairs, Block Association President, spokesperson for the Law Library and the official Liaison for the Veterans Action Group (VAG) in Harlem, New York, and is the founder and Executive Director of VOTE People, the first human rights organization in Harlem. He is a member of the Democratic Party and was the Independent Party of America and Voices of The Everyday People for Change party’s (VPFC) candidate for the 15th Congressional District of New York in 2010. He first ran for the 15th Congressional seat in 2008 under VPFC, the political action committee he founded earlier that year.[1] Schley was a Wilhelmina Model in New York, fireman and electrician in the Atlanta area.

Born and raised in Philadelphia, Schley is the second youngest of six. At the age of 16 Schley took it upon himself to ease the financial burden of his parents by moving to Atlanta, Georgia after high school, equipped with only $600 and a strong will and desire to succeed.[2]

Schley’s professional life has encompassed a colorful journey, which has consistently exemplified public service. He graduated in 1981 from Olney High School in Philadelphia. After high school he moved to Atlanta and worked as an electrical apprentice for the International Brotherhood of Electrical Workers (Union) local 613 between 1981 and 1985. In 1986, Schley became a fireman for the Dekalb County Fire Department. While serving as a fireman he qualified and completed training for the SCUBA Rescue Team within the fire department. In 1988 Schley was approached by a model scout that eventually led to a contract to model the Ebony Fashion Fair and spokesperson for their cosmetic line. As one of only two men and 12 female models chosen nationwide to represent Ebony, he traveled to 200 cities throughout the United States and various countries abroad. Furthermore, Schley’s exclusive contract with Wilhelmina Models in New York City afforded him the resources to support his way through college. In 1990 Schley permanently settled in New York City and would later go on to further his education at New York University where he graduated as a Deans List Honor student with a Bachelors of Arts in Political Science. In 2001 Schley founded “Vote People” an organization to challenge the city’s rezoning plan and to protect broad local interest.[3] Schley was also voted in 2007 as Block Community President for his community advocacy, leadership and vision and currently holds this post. 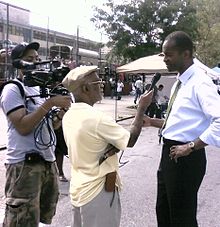 Schley appears weekly on New York based radio station WBAI 99.5 FM where he produces a segment on political current events. He also makes regular appearances on other media outlets such as Fox News, Pure Imagination on Progressive Radio Network, Indashio Runway, WHCR 90.3 FM Harlem based community radio station and is a frequent guest and commentator on Black Empowerment radio show on BlogTalkRadio. In addition Schley is an active contributor to the Black Star News electronic and print media.[4][5][6][7][8][9]

In 2008 the City Planning Commission Chair Amanda Burden announced the rezoning of 125th Street (Manhattan) and declaring “this comprehensive initiative will fulfill the promise of Harlem's ‘Main Street’ as a vibrant corridor and a premier arts, entertainment, and commercial destination in [New York] city.” The zoning changes proposed allowances for taller buildings thereby increasing the density for homes and encouraging the support of artistic and cultural spaces by limiting the street presence of banks and other “non-active” businesses to encourage more pedestrians. The plan would affect the 24 square blocks between 124th and 126th Streets, from Broadway to Second Avenue.

As Executive Director of VFPC Schley fought against the re-zoning proposal, arguing that the city “had not sought the input of the actual community” when it put together the proposal and that the current proposal does not adequately protect or serve the interest of the local community or the historic character of the commercial district. Schley and the rest of the VOTE People research team found a century-old clause in the City Charter that could slow the rezoning process. The clause says that if the owners of at least 20% of the land either adjacent to or across from the area being rezoned disapprove of the development, 75% - not a simple majority of the Council must approve the rezoning for the process to continue. This stalled the rezoning plan and construction of any kind had to cease and attracted attention of the City Planning Commission, media and the broader community. VOTE People legally challenged the appeals court on two occasions. Despite the herculean efforts made by Schley and his organization VOTE People, they were unsuccessful in securing the necessary monetary and legal resources which was essential to effectively wage to overturn the Harlem re-zoning scheme which eventually was given the go-ahead.[10][11][12][13][14]

During the Occupy Wall Street movement which spread to Harlem, Schley suggested that problems in northern Manhattan differ compared with those of Wall Street; rather than finance, they are community-based concerns. "If we are going to step out and occupy Harlem, we need to make sure we're going to occupy the needs of this community. And let's make it clear: You can't do it unabashed. When African Americans step out there, things tend to get hostile."[15] 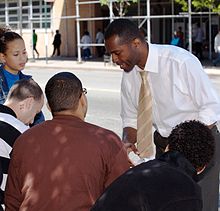 Schley, with young people in the community

Schley’s drive and passion for public service inspired him to establish the community based organization in Harlem called Vote People for Change (VPC) in 2001, while simultaneously embarking on his political career as a canvasser for former Bronx Borough President and Democratic Party nominee for Mayor Freddy Ferrer. In 2003 Schley served as an intern for longtime congressional incumbent of the 15th District Charles Rangel and would later be tasked with managing the housing and social security constituent queries. In 2005 Schley was hired as a political strategist for Felipe Luciano’s in his bid for office and worked as a political consultant and coordinator for field operations in the 17th Ward in Philadelphia for City Council woman Verna Tyler. Schley was nominated by the Independence Party of American and simultaneously ran under the VPC in 2010 for the 15th District Congressional Seat. For a newcomer Schley captured almost 8,000 votes. [16]

Schley’s work has within the legal sector began as an intern for the New York Commission on Human Rights in 2000 where he assisted Deputy Chief of Law Bureau to interpret and investigate allegations of discrimination under Title VII of the Civil Rights Act. From 2003 to 2007 Schley worked as Legal assistant for the New York State Supreme Court Judge where he aided in many cases: family, criminal and civil.

In 2007 Schley was named given the Emerging Leadership Award by the Harlem Children’s Zone for his community service.

In 2011 Schley was awarded for outstanding generosity and dedication by the VAG where he worked as assisted with the organizational structure, acted as a liaison and raised funds for the Youth Summit Program (an initiative to address violence among the youth).