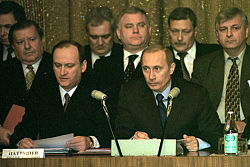 Counterintelligence state (sometimes also called intelligence state or spookocracy) is a state where state security service penetrates and permeates all societal institutions including the military.[1][2][3][4][5][6][7] The term has been applied by historians and political commentators to the Soviet Union, the former German Democratic Republic, Iraq under Saddam Hussein, and modern Russia under Vladimir Putin.

According to a definition, "The counterintelligence state is characterized by the presence of a large, elite force acting as a watchdog of a security defined as broadly that the state must maintain an enormous vigilance and enforcement apparatus... This apparatus is not accountable to the public and enjoys immense police powers... Whether the civilian government is able to control the security bodies is an open question; indeed the civilian government is so penetrated by the apparatus that there is no clear distinction between the two."[4]

There was a massive security apparatus in the Soviet Union to prevent any opposition, and "every facet of daily life fell into the KGB's domain."[4]

The "active reserve" included KGB officers with a military rank who worked undercover. "Trusted contacts" were high placed civilians who collaborated with the KGB without signing any official working agreements, such as directors of personnel departments at various institutions, academics, deans, or writers and actors.[8] Informers were citizens secretly recruited by the KGB, sometimes using forceful recruitment methods, such as blackmail. The precise number of people from various categories remains unknown, but one of the estimates was 11 million "informers" in the Soviet Union, or one out of every eighteen adult citizens.[9]

A "Law on Foreign Intelligence" adopted in August 1992 provided conditions for penetration by former KGB officers to all levels of the government and economy, since it stipulated that "career personnel may occupy positions in ministries, departments, establishments, enterprises and organizations in accordance with the requirements of this law without compromising their association with foreign intelligence agencies."[10] "All big companies have to put people from the security services on the board of directors... and we know that when Lubyanka calls, they have to answer them", said a Russian banker [1]. A current FSB colonel explained that "We must make sure that companies don't make decisions that are not in the interest of the state" [2] [3].

Olga Kryshtanovskaya, director of the Moscow-based Center for the Study of Elites, has found in the beginning of 2000s that up to 78% of 1,016 leading political figures in post-Soviet Russia have served previously in organizations affiliated with the KGB or FSB.[11] She said: "If in the Soviet period and the first post-Soviet period, the KGB and FSB people were mainly involved in security issues, now half are still involved in security but the other half are involved in business, political parties, NGOs, regional governments, even culture... They started to use all political institutions."[11]

"Under Russian Federation President and former career foreign intelligence officer Vladimir Putin, an "FSB State" composed of chekists has been established and is consolidating its hold on the country. Its closest partners are organized criminals. In a world marked by a globalized economy and information infrastructure, and with transnational terrorism groups utilizing all available means to achieve their goals and further their interests, Russian intelligence collaboration with these elements is potentially disastrous.", said politologist Julie Anderson.[10][12]

Historian Yuri Felshtinsky compared takeover of Russian state by siloviks with an imaginary scenario of Gestapo coming to power in Germany after World War II. He noted a fundamental difference between the secret police and ordinary political parties, even totalitarian ones, such as the Soviet Communist Party. The Russian secret police organizations used to various violent active measures. Hence they killed Alexander Litvinenko and directed Russian apartment bombings and other terrorism acts in Russia to frighten the civilian population and achieve their political objectives, according to Felstinsky.[13]

Former KGB officer Konstantin Preobrazhenskiy shares similar ideas. When asked "How many people in Russia work in FSB?", he replied: "Whole country. FSB owns everything, including Russian Army and even own Church, the Russian Orthodox Church‎... Putin managed to create new social system in Russia" [4].

"Vladimir Putin's Russia is a new phenomenon in Europe: a state defined and dominated by former and active-duty security and intelligence officers. Not even fascist Italy, Nazi Germany, or the Soviet Union - all undoubtedly much worse creations than Russia - were as top-heavy with intelligence talent", said intelligence expert Marc Gerecht.[14]