The brain child of Wayne Fitzgerald, the owner of the commercial production firm CAP Media and a former Hereward FM presenter and producer. Initially, the station first broadcast on 106 FM from the Fitzgerald family garage using a Restricted Service Licence for the first 3 broadcasts. In the first half of 1997 the station moved to Church Street, where it broadcast its 4th RSL. Also during this time the station was simulcast on the Local Channel, as well as the cable FM hook-up (106.3 MHz), via the local cable companies system (Bell Cable Media originally).

The dates of the restricted service licence broadcasts were:

The station was awarded a permanent FM licence on 106.8 MHz and launched at 10:00am on Saturday 24 July 1999 with a live outside broadcast in Cathedral Square, hosted by Wayne Fitzgerald, Stuart Francis and various local dignitaries, was also held. The first song played was 'Back For Good' by Take That[1][2]. This was a pre - recorded piece produced by Wayne Fitzgerald the night before broadcast. The first scheduled programme was Saturday Sport, with Keith Hazelton & Neil Evans.

The station was originally owned by GP Broadcasting Limited, and was almost sold to GWR, for £2 million, in 2000, before finally being bought by Forward Media Ltd in March 2001. In 2009 Adventure Radio purchased the station.

On January 4, 2010 Lite FM rebranded as Connect Radio 106.8 in line with sister station Connect Radio 97.2 & 107.4. The station now shares resources with the other Connect FM, Chelmsford Radio and Southend Radio which are all owned by the same group. All programming is unique for Connect FM apart from the Vodafone Big Top Forty.

Simon Potter and Sharon McAllister were the original newsreaders and served the station for six years before changes within the station saw a variety of different people reading bulletins. Simon Potter rejoined the station on a part-time basis in December 2007 to compile and read the breakfast news. National and international news is provided to the station by IRN. The news is currently edited by Carlo Fiorentino. 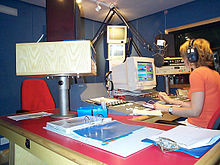 The station has three studios consisting of two identical broadcast studios (Studios 1 & 3) and a talks studio for guests (studio 2), initially it was thought the DJ's would alternate between studios 1 and 3 but this was never put into action and hot-swapping between programmes remains. The stations music output is controlled by an ENCO Digital Audio Delivery system which allows for extensive automation, this is backed up by a variety of traditional CD and MiniDisc players mounted in moveable pods within the studio desk. Final output is controlled by the presenter through a customised RPL studio console which has 2 PPM Peak meters and a combined Mono output meter.