Comporta is a civil parish and village in the municipality of Alcácer, in the old district of Setúbal, in continental Portugal, located at the base of Tróia Peninsula, along the Sado estuary. Information from the 2001 Census, identified a population of 1348 almost equally divided by gender (715 men, 633 women).

The history of this area stems from early settlement by black slaves, its toponymy assumed to be a condescending term to refer to their well mannered natures.[1][2] During the time of the Companhia das Lezírias, Comporta was a small agglomeration of 65 impoverished cabanas around a principal estate.[2]

Until 1989, Comporta was a part of the parish of Santa Maria do Castelo. 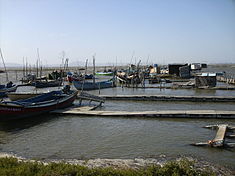 The historical dock in Camporta, used for many years by local fishermen 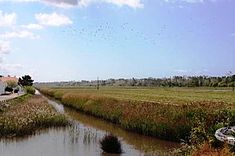 The rice fields in Comporta: the cultivation of rice has been an integral part of the economy

Located along the peninsula of Tróia on the southern margin of the Sado River, the region is characterized by the number or rice fields under cultivation. In addition, its vicinity within the Sado estuary makes the region a focus of many species of terrestrial and marine birds, including the grey herons, storks and flamingos.

While Comporta is the administrative centre of the parish, there are several small population concentrations throughout (localities, places or villages); they include: Brejo da Carregueira, Brejo da Carregueira de Cima, Cambado, Comporta, Figueiral Moitinha, Murta, Possanco, Torre, Torroal and Carrasqueira.

The principal economic activities in the area include fishing, agriculture, small industry associated with rice harvesting for local and migrant workers, in addition to many teritary services (hotels, bakeries, civil construction, sawmilling, carpentry and small commercial shops). Tourism has become an increasingly important part of this mix, with new investments into the area: the main village of Comporta has developed into an upmarket holiday destination, due to its tourist-friendly beaches and the number of restaurants and boutiques.[3]

Commercial rice cultivation was an important part of the economy since 1925, providing employment to many factories, although over the years these facilities have been closed and the management of the lands transferred to Lisbon or Ribatejo.[4] The "Comporta" brand, promoted by the Herdade da Comporta since 1925, gave way to new packaging under the Alcacer do Sal or Coruche brands.[4] The rice industry has become less an integral part of the community, and only the Arroz Ceifeira brand, managed by João Duarte Correia (an ex-miller in the Torrinha factory) continues to sell/promote the local industry.[4]

Portuguese handicrafts, particularly miniatures boats of wood, quilts, needlework and embroidery are common in many of the villages.

Although the patron saint is Saint Peter, the residents of Comporta continue to celebrate other religious festivals associated with the popular saints, in addition to the Festival do Arroz (English: Rice Festival), which celebrates the founding of the parish. Every two years the village of Carrasqueira is the site of the Festival da Batata Doce (English: Sweet Potato Festival), as well as being the annual meeting-place for motorcyclists. On the second Friday of each month, there is a traditional market, in which the inhabitants sell handicrafts, food and other goods.

Carresqueira is also known for the wooden dock, a municipal heritage due to its method of construction, extension and important contribution to the local landscape, along with the Concheiros do Paleolítico.[1]