A CSAR mission may be carried out by a task force of helicopters, ground-attack aircraft, tankers and an airborne command post.[2] The USAF HC-130, which was introduced in 1965, has served in the latter two roles.[3] 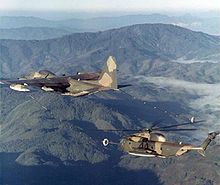 A Sikorsky HH-53B of the 40th Aerospace Rescue and Recovery Squadron refueling from an HC-130P over North Vietnam during the Vietnam War.

During World War I there were several impromptu rescues that would now be described as CSAR.

During the Vietnam War the costly rescue of Bat 21 led the US military to find a new approach to high-threat search and rescue. They recognized that if a SAR mission was predestined to fail, it should not be attempted and other options such as special operations, diversionary tactics and other creative approaches tailored to the situation had to be considered. Recognizing the need for an aircraft that could deliver better close air support, the US Air Force introduced the A-7 Corsair. The military also improved the night capability of helicopters and area denial munitions.[5]:36

In 1915, during the First World War, Squadron Commander Richard Bell-Davies of the British Royal Naval Air Service used his single-seat aeroplane to rescue his wingman who had been shot down in Bulgaria. His Victoria Cross citation included "Squadron-Commander Davies descended at a safe distance from the burning machine, took up Sub-Lieutenant Smylie, in spite of the near approach of a party of the enemy, and returned to the aerodrome, a feat of airmanship that can seldom have been equalled for skill and gallantry."[6]

On 21 April 1917, Captain Richard Williams of the Australian Flying Corps landed behind enemy lines to rescue a downed comrade.[7][8]

In 1972, during the Vietnam War, Lt. Col. Iceal Hambleton, a USAF navigator with a background in ballistic missile technology and missile countermeasures, was the sole survivor of an EB-66 shot down during the Easter Offensive. He eluded capture by North Vietnamese forces until his rescue 11½ days later. During the rescue operation, five aircraft were shot down, eleven US servicemen were killed and two men were captured. The rescue operation was the "largest, longest, and most complex search-and-rescue" operation during the entire Vietnam War.[9] It has been the subject of two books and the largely fictionalized film Bat*21.[10]

Pararescuemen return with a downed pilot from a successful rescue mission in southern Iraq (2003).

On June 2, 1995, a USAF F-16C was shot down by a Bosnian Serb Army SA-6 surface-to-air missile near Mrkonjić Grad, Bosnia and Herzegovina. The American pilot, Scott O'Grady, ejected safely and was rescued six days later.[12] The operation became known as the Mrkonjić Grad incident.